THE ASCENSION OF MARCUS AURELIUS
AND LUCIUS VERUS AS CO-EMPERORS 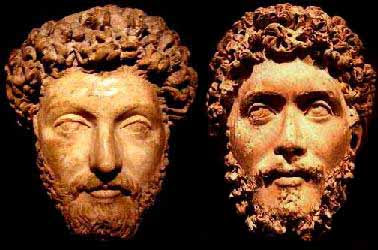 UPON the occasion of the Death and Apotheosis of Antoninus Pius on 7th March 161 AD, Marcus Aurelius and Lucius Verus became co-Emperors, both surnamed Antoninus, a name which the ancient Romans equate with inestimable glory.

Marcus being the elder and wiser, was given the title Augustus, while Lucius took the name Caesar.

They remained cordial to one another though their vastly different characters were always a cause of discord, though never of rivalry or outright animosity.

They were a harmonious and cooperative pair of rulers, the only example of effective imperial brotherhood in the long history of Rome.