WE MOURN THE DEATH
OF ANTINOUS-ADONIS 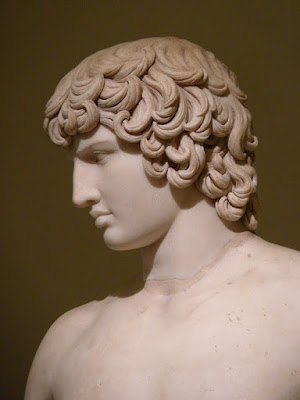 ADONIS was the most beautiful boy that ever lived, so beautiful that Venus fell totally in love with him and forsook all her love-joys in order to follow him on his hunt through the forests of Mt. Lebanon.

But Adonis was unmoved and completely rejected her advances. She became infatuated and abandoned herself to the boy who only cared to hunt.

While she was away, Mars transformed himself into a wild boar and let Adonis pursue him through the woods.

The God of War suddenly charged the young God of Beauty and disarmed him, and with a deadly kiss, gored Adonis in the groin sinking his razor tusk between his perfect white legs.

When she returned, Venus found her beloved boy dead and cut her hair in mourning, she immortalized his soul as a flower, and made the river that bears his name flow red.

The love between Venus and Adonis was unfulfilled, her adoration for him was unreturned because Adonis had no care for women, and he preferred his hunting dogs to her gentle caresses.

Only the War God Mars had his way with Adonis, though motivated by jealousy and rage, it was a violent sexual attack, for which all the world must mourn, because in the savagery of the Lust of Mars, the world was forever robbed of the beauty of Adonis.

"We venerate Adonis and seek his shadow in the gardens of human beauty. Antinous is the 'Adonis of the Underworld' ... our perfect desire who flees from our embrace ... but we, like Venus, never abandon him to his endless hunt, and caress his cheek even though our hands can never touch him."