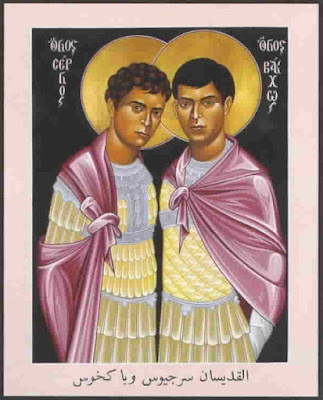 OCTOBER 5th is Aura Placidus, the autumnal feast of Dionysus, deity of liberation and ecstatic transcendence over death as symbolized by divine intoxication.

Aura Placidus means "gentle breeze" and today is a day to simply enjoy a day of rest.

For Dionysus, it was a day of rest after the gathering of the grapes and preparing them for fermentation ... and maybe having a taste or two, just to see how it was getting on.

The Aura Placidus was celebrated with singing, dancing and games ... and with much feasting and drinking.

Antinous traditionally has been identified with Dionysus "Twice Born" of mortal woman and divine radiance.

Antinous/Dionysus reminds you that you are HOMOTHEOSIS ... Gay Man Godliness Becoming the Same in Divine Radiance.

Today we take a break, sit back, and toast Antinous/Dionysus the divine liberator!

Here, we see how Antinous harvests grapes as a dog looks up at him adoringly, and who can blame it?

This is the Lanuvium bas-relief. Its inscription describes a group loosely translated as the Companions of Antinous.

The inscription says Antinous was born on November 27th. That is how we know his birthday.

Join Antinous in loving all creatures!

NOW you can now buy a replica of the British Museum's famous Townley bust of Antinous for your own home in marble-like stone or in bronze. The original is on display in the Museum, in Room 70, in the Ancient Greece and Rome section. This replica has been created by ThinkSee3D, experts in 3D digital heritage in Britain.

The MARBLE REPLICA was developed from a 3-D scan but digitally improved, 3-D printed and moulded. It is sold as a cast in a composite containing some real marble, gypsum and resin. Size: 25cm tall, 2.5kg. It costs £180 (about $230). 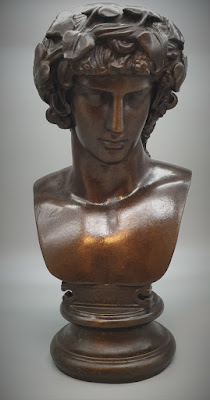 The BRONZE MODEL is derived from a 3-D scan but digitally improved moulded, cast in wax then investment cast in bronze.

This reinterpreting of the Townley bust (in this case by changing materials not form) makes this a unique and rare object that will itself last for thousands of years.

To create a replica, ThinkSee3D takes the British Museum Digital Team's scans of artefacts on display in the Museum's galleries and produces 3D prints from which moulds are made.

These moulds are then used for production of the replicas which are cast using traditional techniques and finished by British artists.

Both busts are available via global delivery service and many have already been sent to Europe, Australia, India and the US. The cost of shipping is calculated when you order depending on your location.  Payment is via credit card (via Stripe) or Paypal (which most people use).

CLICK HERE for the full range of other sculptures from ThinkSee3d!

THE FESTIVAL OF THE TOMB OF OSIRIS 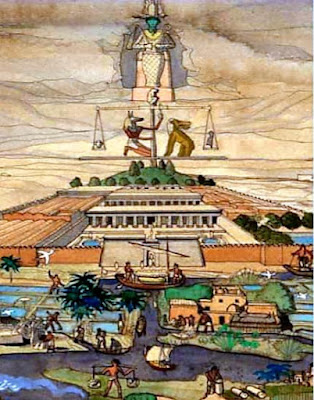 THE 3rd of October is the feast of the Netjer Arriving at Abydos (site of the Tomb of Osiris) in Egypt which we commemorate because Antinous has always been equated with Osiris as deity of transcendence over death.

This Egyptian festival is part of the re-enactment of the legend of Isis and Osiris.

Today the body of Osiris would be brought by boat up the Nile accompanied by Isis, Nephthys and other mourners, priests and priestesses to the ancient burial site of Abydos. It was here that the Mystery of the death of the god, and his burial, took place. 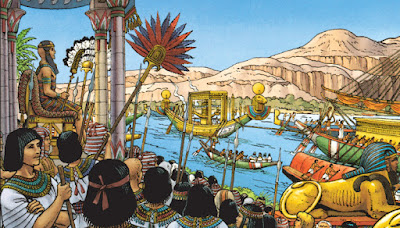 This represented the triumph of Osiris over death. An effigy of Osiris was removed from his temple and processed along the Nile to the jubilation of crowds lining the river banks.

Not many people realized that there is a symbolic Tomb of Osiris which was a pilgrimage site for millions of Egyptians over the centuries.

Many Egyptians even designed their own tombs to be a REPLICA TOMB OF OSIRIS.

Many pharaohs also built symbolic tombs at Abydos in addition to their actual tombs in Thebes, Memphis and elsewhere.

Antinous died before reaching Abydos. Did Hadrian weep at the mysterious Osireion Tomb Of Osiris behind this temple? Did he bury Antinous in this most holy of Egyptian cities? Is the Lost Tomb of Antinous hidden in the "wadi" (arroyo) on the edge of the western desert where so many Egyptians buried their loved ones to be close to Osiris? 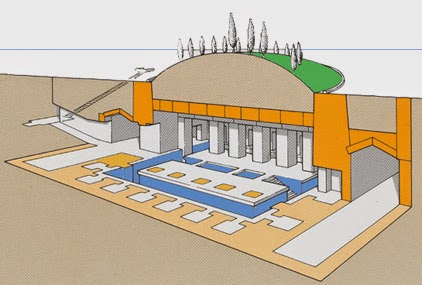 The Tomb of Osiris is a subterranean chamber fed by an underground channel from the nearby Nile, which created a moat inside the chamber. The chamber was accessed by priests via a long, dark passageway.

A mound of earth covered the tomb, symbolizing the original mound which rises out of the cosmic depths in the Egyptian creation myths.

The mound, which is a feature of illustrations in the Egyptian Book of the Dead, is thought to be the inspiration for the first pyramids.

But that raises the controversial issue of the true age of the Tomb of Osiris, an issue hotly disputed by experts.

At nearby Antinoopolis, archaeologists have detected a "deliberately buried" structure with ground-penetrating radar in February and suggested it could be an OSIREION ... symbolic Tomb of Osiris ... raising hopes that this could be the Lost Tomb of Antinous.

Posted by Hernestus at 2:04 PM No comments:

'TOTALITER ALITER'
THE TALE OF THE TWO PRIESTS OF ANTINOUS 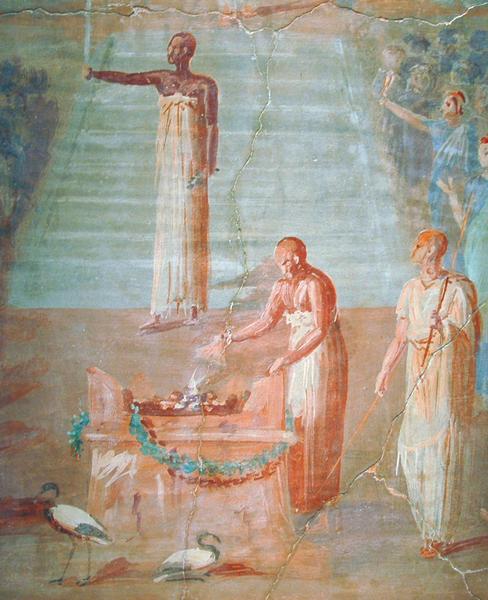 TWO PRIESTS  of Antinous at the Temple of the Blessed Boy in Rome had devoted their lives to the Good God and were getting on in years.

As young men they had become priests together. Their love for each other was symbolized and enhanced by their love for Antinous. They had lived out their lives together at the great Temple of Rome under the most exalted Priest Nikias.

Nikias of Rome was the author of a famous inscription in Greek which addresses Antinous as NEOS HERMES the "New Hermes" who conveys the deceased through the portals of death into transcendent light. A great Antinoo-Hermeticist, Nikias had taught them much about the triumph of Antinous over death.

And now, as toothless old men, they were approaching the final stage of their earthly priesthood. Both men were frail and ill. They knew death was imminent.

But they were unafraid, for they were confident that they would be re-united in death through the grace and love of the Most Great and Good God whom they had served so faithfully all their lives.

But how exactly would that re-union occur? The ancient texts spoke of the Barque of Millions of Years sailing across the heavens towards the Star of Antinous. But that was the Egyptian imagery, and these priests were both Romans and had only ever served in the Antinous Temple of Rome.

The Rome Temple would of course place their death masks in niches in a special area of the temple dedicated to former priests.

Incense and prayers would be offered to them. Would their shades inhabit those niches?

Would Antinous welcome them in Hades, despite the fact that Antinous the Boy God had come from Bithynia in Asia Minor?

Would their souls be reincarnated as some Eastern mystics believed? Would they hover between heaven and Earth or perhaps be consigned to spending part of the year in the underworld and part of it as lemurs roaming the Earth?

They weren't afraid. But they were exceedingly curious to find out. Confidentially, they believed amongst themselves that they would sail with Antinous aboard the Boat of Millions of Years —  a perpetual journey which would never end. But they weren't sure ....

They had spent years perfecting their meditation skills and, without false modesty, they could claim to be masters at the art of trance vision travel. They both knew that the Egyptian hieroglyphs had told the truth in promising that Antinous speaks through dreams and visions. They also knew how to send psychic messages to each other, and had done so on many occasions. 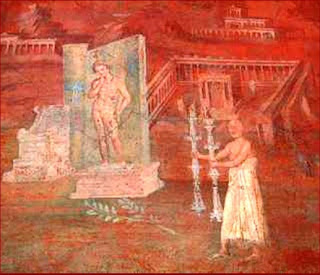 So they made a deal. He who was the first to die would appear to the other in a dream and reveal what the afterlife was like.

As accomplished as they were, they nonetheless knew that such astral communication must be as succinct and simple as possible.

So they agreed that, if the afterlife was as they had envisioned it, the deceased would appear to his friend and utter the word TALITER meaning "exactly so" as they had expected it to be.

And if it was not as they had imagined, the deceased would say ALITER meaning "different" from what they had expected.

The fateful day came not long afterward, and the surviving priest lit incense and recited prayers before the niche mask of his beloved friend and fellow priest.

That night, almost immediately after his head touched his pillow, his deceased friend appeared to him. He was no longer old and sick and frail. He was as young and handsome as the day they had entered the temple. And he was smiling and clearly very excited and seemed to have forgotten the agreed-upon words.

"Taliter or aliter, which is it?" the sleeping priest asked his departed friend.

The friend smiled bigger than ever and said: TOTALITER ALITER — "totally different" — and still beaming with joy, he turned and vanished into golden light.
Posted by Hernestus at 12:00 AM No comments:

"Three times the sun had ended the year, in watery Pisces, and Orpheus had abstained from the love of women, either because things ended badly for him, or because he had sworn to do so.
"Yet, many felt a desire to be joined with the poet, and many grieved at rejection.
"Indeed, he was the first of the Thracian people to transfer his love to young boys, and enjoy their brief springtime, and early flowering, this side of manhood."
- Ovid: the Metamorphoses
~SVBIA
Posted by Hernestus at 12:00 AM No comments:

Email ThisBlogThis!Share to TwitterShare to FacebookShare to Pinterest
Labels: antinoo, antinoos, antinous, antonyus subia, antonyus subia quotes, gay god, gay spirituality
Older Posts Home
Subscribe to: Posts (Atom)
ALL THOSE WHO LOVE AND TAKE FAITH IN HIS DIVINITY ARE ENCOURAGED TO JOIN IN THE VENERATION OF ANTINOUS THE GAY GOD.