HYPATIA OF ALEXANDRIA
SAINT OF ANTINOUS 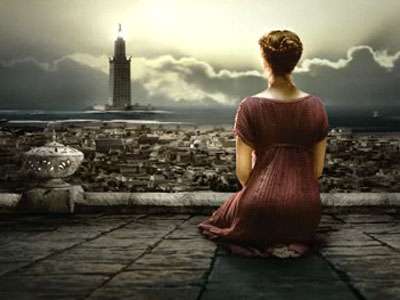 ON March 31st the Religion of Antinous solemnly commemorates the glorious life and cruel death of Saint Hypatia of Alexandria.

Hypatia is one of the most important female philosophers who ever lived, and her tragic murder at the hands of fanatical Christians on the steps of the Great Library of Alexandria is symbolic of the barbaric forces which brought down the worship of Antinous and other Classical deities.

The brutal stoning-flaying-immolation death of Hypatia in about the year 400 AD is regarded by many historians as the beginning of the Dark Ages.

St. Hypatia was a philosopher and mathematician who lived in Alexandria during a time of turmoil and conflict between Christians and the last pagan philosophers of the Great Library.

Her father was the Philosopher Theon, and Hypatia studied among the Neoplatonists. She was the author of several highly reputed works and commentaries, none of which has survived. She held a reputation of excellence that exceeded her contemporaries. 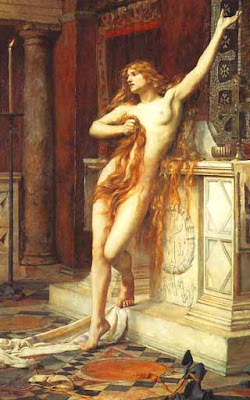 Hypatia taught among the male philosophers and attracted a large following even among Christians. Her beauty was highly desired by numerous men, but she remained chaste (or at least unmarried) all her life, which leads some to suspect lesbianism.

The proud life of Hypatia came to an end at the end of March during the season of Lent when she was attacked by a Christian mob, led by a fanatic Deacon named Peter, who dragged her through the streets to a church called Caesareum.

There she was stripped naked and killed by the mob with their bare hands. It was said that they stoned her with ceramic roof tiles, then flayed her flesh with razor-sharp shards of oyster shells, tore her limb from limb and burned her.

"Saint" Cyril, Bishop of Alexandria, who encouraged her assassination, was then praised for eradicating the city of "idolatry and witchcraft".

The Martyrdom of St. Hypatia of Alexandria is one of the most profound examples of Christian violence against paganism, women, and philosophy. And she is noted as one of the last reasoning pagans murdered by the irrational religion which has dominated Western Civilization ever since.

Her death is among the heinous crimes of the Christian Church, whose atrocities continue to this day. The image at right, by Charles William Mitchell, portrays Hypatia just before her death, naked at the altar, imploring her attackers to take heed of their own faith, which they continue to ignore.

For these reasons and in memory of the unnamed Ancient Priests of Antinous who suffered similar fates, the Religion of Antinous has proclaimed Hypatia of Alexandria a Saint and Venerable Exemplar and honors her with a Feast Day on March 31. As Sacred Synchronicity would have it, her Antinoian Feast Day in 2009 coincided with the release of major motion picture based on her life.

In the film set in Roman Egypt in the final days of the 4th Century A.D., Weisz plays the astrologer-philosopher Hypatia of Alexandria, who fights to save the collected wisdom of the ancient world. Her slave Davus (Max Minghella) is torn between his love for his mistress and the possibility of gaining his freedom by joining the rising tide of Christianity.