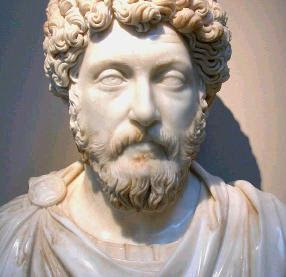 MARCH 17th is the anniversary of the death of Marcus Aurelius and we in the Religion of Antinous set aside this day each year to remember the last of the great philosopher-emperors, and a man who knew both Hadrian and Antinous.

What follows, is adapted from writings over the years by Flamen Antinoalis Antonius.

As a young boy Marcus Aurelius had caught the eye of the Emperor Hadrian. He was appointed by the Emperor to priesthood in the year 129 (just a year before the death of Antinous), and Hadrian also supervised his education, which was entrusted to the best professors of literature, rhetoric and philosophy of the time.

Marcus Aurelius discovered Stoicism by the time he was 11 and from his early twenties he deserted his other studies for philosophy. The Emperor Antoninus Pius, who succeeded Hadrian, adopted Marcus Aurelius as his son in 138.

Antoninus Pius treated Aurelius as a confidant and helper throughout his reign; Marcus Aurelius also married his daughter, Faustina, in 139. He was admitted to the Senate, and then twice the consulship. In 147 he shared tribunician power with Antoninus. During this time he began composition of his Meditations, which he wrote in Greek in army camps.

At the age of 40, in 161 Marcus Aurelius ascended the throne and shared his imperial power with his adopted brother Lucius Aurelius Verus. Useless and lazy, Verus was regarded as a kind of junior emperor; he died in 169. After Verus's death he ruled alone.

Most of his reign was spent fighting and negotiating with the Germanic barbarians who were steadily crowding around the borders of the Empire. Marcus was able to hold them back with a succession of victories and peace treaties. In 177 he made his son, Commodus, joint-Emperor, though Commodus had no interest in the responsibility, caring more for the gladiatorial sports, but Marcus, the philosopher- king, took no notice of his son's blood-lust, which was to later cost the Empire dearly.

For much of his reign, Marcus Aurelius had suffered from severe illness, but his calm devotion to stoic virtue gave him the strength to continue without rest and without his poor health interfering with his duties. While with the legions on the German frontier, Marcus Aurelius suddenly died on March 17th in the year 180AD.

His ashes were conveyed to Rome and placed in Hadrian's Mausoleum. Commodus assumed power and began the chain of tragic events that are said to have brought the decline and fall of the Roman Empire.

For his wisdom, and strength, and because he was the last instrument of Hadrian's plan that brought so much glory, and prosperity to Rome, we venerate the deified Marcus Aurelius as a god of the Religion of Antinous.
An important feature of the philosophy was that everything will recur: the whole universe becomes fire and then repeats itself.