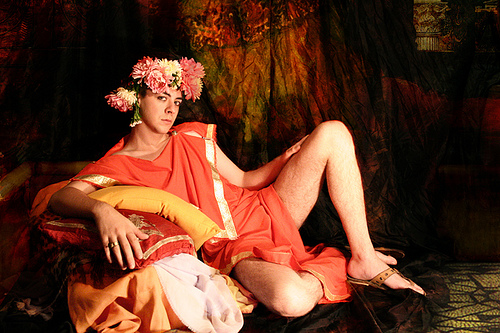 Imperator Caesar Marcus Aurelius Antoninus Augustus was born on an unknown date in the winter of 204 AD in the city of Emesa in Syria.

His birth name was Varius Avitus Bassianus, and he is believed to have been the son of Caracalla, for which reason he was declared Emperor by the Legions of Syria during an uprising against the short-lived Emperor Macrinus who had assassinated Caracalla and taken the throne.

Varius Bassianus was only 14 years old when he became sole ruler of the Roman Empire and took the name of Antoninus. He was the last Emperor to bear the sacred name of the most glorious rulers of the world, the Antonines. He is known to history as Elagabalus, because he was from birth the high priest(ess) of the androgynous sun deity Elagabal.

What Elagabalus is famous for is that he was an extreme homosexual phallus worshipper with an insatiable fondness for chariot racers who he often elevated to the highest positions of authority simply based on the size and grace of their penises. He is criticized by ancient historians for portraying himself as Venus on Mount Ida, and allowing himself to be sodomized on stage by his chariot racers in the roles of various gods in full view of an audience. 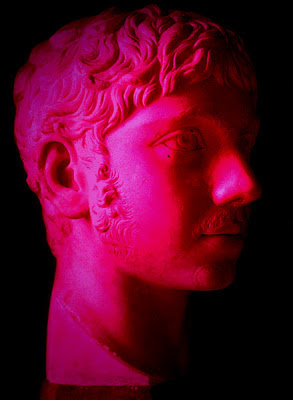 Elagabalus, devoted to the androgynous god Elagabal, made it his priority as emperor to demote all others gods and goddesses to the position of servants to the principal deity. A black stone phallic representation of the god was processed through the streets of Rome to the temple annually.

Many of the sacred symbols of other religions were moved to the temple of Elagabal, including those of Jews and Christians. To persuade followers of other deities to worship Elagabal, the emperor participated in the rituals of several other religions. On a daily basis animal sacrifices were performed, consistent with the practices of many of the religions.

Victorian historians record Elagabalus' life as scandalous, yet an examination of their remarks reveal a troubled trans youth struggling with his identity. 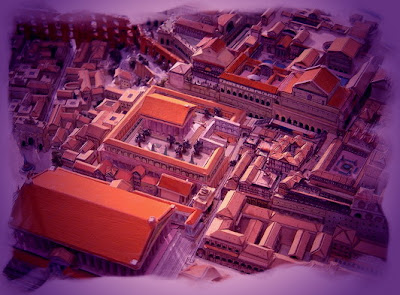 At the age of 14, in 218, Elagabaltus, a zealous believer, declared a religious initiative giving Elagabal precedence over all other gods, even Jupiter himself.

The god was also to have a consort. Pallas Athena was the first choice, a goddess tended by the Vestal Virgins. As part of his strategy Avitus married one of the vestals. When Romans balked at the violation of a vestal virgin, however, he opted for the symbolic marriage with Urania, a moon goddess.

His attempt to unify Rome under one religion met with strong resistance and did nothing to moderate his unpopularity. In the very year that Elagabalus became emperor the Third Legion, which had placed him in office, attempted to replace him with Verus, their commander. The attempt failed. Over time, subsequent attempts by the Fourth Legion, by the fleet, and by a pretender named Seleucus also failed.

But as unpopular as he was with the nobility and commanders of the Legions, he was not at all unpopular with the plebs, upon whom he lavished gifts and games. As emperor he had a Temple built to Elagabal, restored the Flavian Amphitheatre (the Colosseum) that had been damaged by fire and completed the construction of the public baths of Caracalla in the Vicus Sulplicius. He also had built a palace complex, the Horti Variani, with an amphitheatre, a circus, a bath, and audience hall.

His most famous projects, however, were the temple of Elagabal (the Elagaballium) on the Palatine hill and another such temple on the southeastern edge of the city. From these temples the emperor delivered largesse to crowds that gathered below.

None of his works, or gifts to the people, were sufficient to offset his reputation among the elite, tarnished by his promiscuous behavior with men and women. Regardless, provided with almost absolute power one wonders, wouldn't most teenage boys be self- indulgent? Many of the adult emperors did no less. A colossal, wall-sized painting of this scene by Lawrence Alma-Tadema shocked and titillated Victorian  viewers.

As the young emperor's popularity dwindled his mother, Julia Soaemias, and other supporters recognized that the royal family was in danger of their lives. Rome had a tradition of murdering unpopular emperors, and sometimes their adherents as well.

In hopes of rescuing the regime his close family and supporters induced Elagabalus to adopt his cousin Bassianus Alexianus, a young man popular with the praetorian guard, and name him Caesar, heir to the throne.

The scheme backfired in that Julia Mamaea, Alexianus's mother, was as ambitious as Julia Soaemias and desired to see her son emperor as quickly as possible. Mamaea, playing on the praetorian guard's contempt for Elagabalus entreated for the assassination of Elagabalus. Soaemias, discovering the adoption had created greater danger not less, urged Elagabalus to have his cousin killed lest he himself be murdered. However, no one would obey the order.

Here is where we catch up with Julia Soaemias and Elagabalus:

"Mother," spoke the young emperor, 17 years old, the glow of childhood still reflected in his eyes, "they don't understand what I want to accomplish. If they did, they wouldn't hate me."

"Child," replied Julia Soaemias, "they have more than one reason to hate you. You're obsessed with being a woman and you flaunt Roman tradition. You seek to bring down their gods and make them slaves to Elagabal. Elagabal knows I worship him as much as you, but he wants not that we place him above other gods."

"I will go to the praetorian camp and entreat with them, explain what I intend. Surely they will listen. A single god for all Rome would unify us as naught else might. Our former glory would be restored and Rome would endure forever. I will go. I will go now! The armies must be made to understand," declared the emperor, rising from his throne even as he spoke.

"If you go to the guard they are as likely to kill you as listen to you," admonished his mother.

"That is a chance I must take," he retorted, "Rome is more important than my life."

At the praetorian camp:

"All hail Nellie Ellie," sarcastically called a guardsman upon the approach of the emperor.

"Run, fear for your manhood, she comes to drain us dry," screamed another voice.

Other guardsmen laughed and joined in, a little nervously at first, after all this was the emperor of Rome, but with growing enthusiasm.

Stepping down from his chariot Elagabalus, dressed as a woman, his wig meticulously styled and his makeup artfully done, spoke in a loud voice, "I have come to discuss with you the fate of Rome."

His mother, having accompanied him stepped down beside him, on her countenance fear was plainly written. She had a bad feeling about what could happen that night and the crowd of soldiers mocking and jeering did nothing to lessen that fear.

"Alexianus would have me murdered and restore the old gods, the many religions which kept Romans apart. I have dedicated my rule to bringing our great nation together under one god, you must see the wisdom in such a venture," he called out in a loud voice, ignoring the insults and belittling remarks.

"Wisdom from a boy whore," yelled out a disgruntled soldier, "Drunk one night, boy, I had you. Was that your wisdom, Nellie Ellie?" The crowd laughed uproariously. 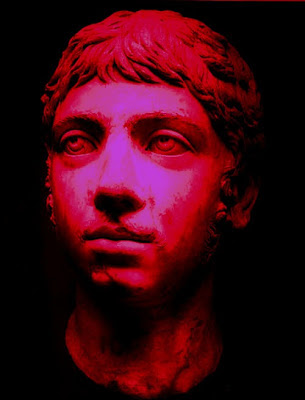 "I am the priestess of Elagabal. It is my place to be among my people, to suffer the worst and the best at your hands. I am also your emperor and I command you to kill my rival, Alexianus," he ordered.

His mother leaned forward and whispered in his ear, "Tread softly my son, their temper is not to be trifled with. I like not their mood."

"You have had my spear once, priestess," venomously spat a soldier near the front of those gathered. "Now have another!" As the soldier uttered the words he hurled a spear. It landed to one side, but came perilously close to hitting Elagabalus.

"I want nothing but the betterment of Rome," shouted Avitus, taking his mother by the arm and retreating to his chariot. Too late he took the reins of his spirited horses, the soldiers had already surrounded his chariot and taken control.

Enraged the youthful emperor screamed, "I am emperor. It is I who know what is best for Rome. Not you traitors. Now, let go of my horses!" With his whip he struck at the face of the nearest soldier, landing a vicious blow that brought blood.

The soldier in turn pulled Elagabalus from the chariot and stabbed him. Others joined in. The last thing Elagabalus saw before he died was the soldiers pulling his mother from the chariot,"Let my mother be," he tried to yell, but only a whisper passed his lips.

So ended the reign of the trans teenage Varius Avitus Bassinus, having ruled Rome for but four years.

He had been the first emperor to attempt to unify Rome under one god.

His gender variance, his sexual escapades while frowned on but tolerated had destroyed his credibility. After the murders, his body and that of his mother's, were dragged naked through the streets of Rome.

Finally, beheaded, both bodies were thrown into the Tiber, the punishment for convicted criminals.

Elagabalus reigned only four years, and was 18 years old when he was murdered, the same age as Antinous.

Though his character is condemned as perverse, the open phallicism that he imposed upon Rome, and the dramatic exhibition of his homosexuality warrant his deification.

Posted by Hernestus at 5:02 PM