WE JOYFULLY CELEBRATE THE JUNONALIA
FEAST OF JUNO QUEEN OF HEAVEN 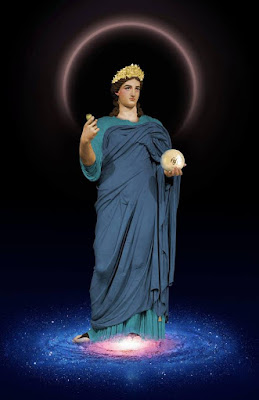 ON March 7th we observe the Junonalia feast of the Roman goddess Juno, with whom Hadrian's wife and consort Empress Sabina is identified ritually. (Art by ANTONIUS SUBIA).

On this day, Ancient Romans observed the Junonalia to honor their Queen of Heaven. This festival was celebrated by the matrons of Rome in which a procession of 27 girls accompanied a statue of Juno carved out of a cypress tree.

There were processions in which statues of Juno were carried through the streets and ending at the Temple of Juno. Prayers and generous offerings of flowers and flowering plants were brought to Juno.

There was dancing, merriment, and wonderful feasting (for the Romans were known for their feasts). From how it sounded, it would be very similar to a modern "girls night out."

The Junonalia was also attested in a fragmentary poem De Iunonalibus, attributed to Claudian. In it, Juno is addressed as mistress of the celestial pole, and the spouse and sister of the king of heaven.

Her function as a goddess of marital bonds is also noted. Although the text is conjectural at this point, she may be asked to grant a return.

The Junonalia may have concluded a three-day festival begun March 5th with the Isidis Navigium (Sailing of Isis). In the Metamorphoses of the Metamorphoses of Apuleius, Isis is addressed as Queen of Heaven, and by the 2nd Century a number of goddesses, including Juno, shared the epithet Caelestis.

As the patron goddess of Rome and the Roman Empire, Juno was called Regina (Queen) and, together with Jupiter and Minerva, was worshipped as a the Juno Capitolina (Capitoline Triad) in Rome. Juno was a daughter of Saturn and sister (but also the wife) of the chief god Jupiter, as well as being the mother of Mars and Vulcan.

Juno's theology is one of the most complex and disputed issues in Roman religion. Even more than other major Roman deities, Juno held a large number of significant and diverse epithets, names and titles representing various aspects and roles of the goddess. In accordance with her central role as a goddess of marriage, these included Pronuba and Cinxia (she who loses the bride's girdle).

Juno looked after the women of Rome, with her Greek equivalent as Hera and her Etruscan counterpart was Uni. Hera was the Greek goddess for love and marriage, so Juno was Rome's goddess of love and marriage.

Juno's own warlike aspect among the Romans was apparent in her attire, as she often appeared sitting with a peacock armed and wearing a goatskin cloak. The traditional depiction of this warlike aspect was assimilated from the Greek goddess Athena, whose goatskin was called the aegis.

Ancient etymologies associated Juno’s name with iuvare (to aid, benefit) and iuvenescendo (rejuvenate), sometimes connecting it to the renewal of the new and waxing moon. This perhaps implied the idea of a moon goddess.