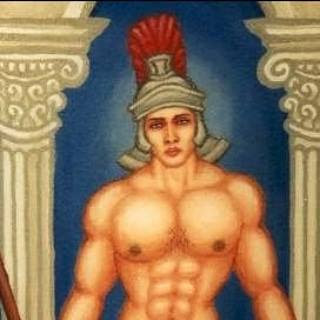 WHEN the Sun enters the Sign of Aries at the March Equinox, we honor Antinous in his special guise as Antinous/Mars.

Mars, God of War, son of Jupiter and Juno, father of Romulus and Remus, founders of Rome, was the divine spirit of the Roman Army whose legions subjugated the world.

His power ran like molten steel in the blood of Romans who he made them invincible.

The ram was sacred to him, and thus the sign of Aries was devoted to him, as it was in the early spring, after the fields were sown and before the harvest that the men went to war.

Originally Mars was an agricultural deity, whose duty was to protect the fields from marauders. But he soon became an aggressive conqueror, whose sacred spears were ritually shaken by the Flamen Martialis when the legions were preparing for war.

He had twin sons who accompanied him and went before the armies in battle, their names were Phobos and Deimos, fear and panic.

He was the illicit lover of Venus, and it is said that they were the co-creators of Rome who through war brought love and peace to the whole world. It was in this spirit that Hadrian worshipped the pair.

Mars is the great spirit of masculinity, the violent, courageous power of the male sex, the penetrator and subjugator.

His emblem, an iron spear, is a symbol for the phallus, and so it is that Mars is the great potent Phallus of Man, the impregnator.

In this sense he is venerated as the warrior within all men, and as our most extreme, animalistic, carnal, aggressive nature.

He is the conqueror of winter, the dominator of spring, the protector of life, and the bringer of death.

He is war and fury, selflessly courageous, for the protection of the weak and for the defeat of the strong.

Mars never surrenders, and this is why Venus is so mad with lust for him, and why we adore him as our protector.