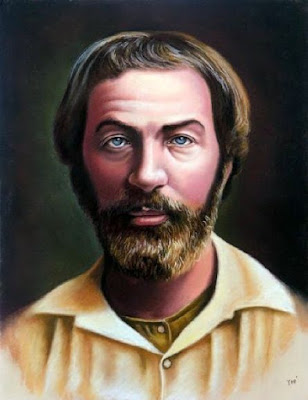 ON March 26th the Religion of Antinous takes a moment to celebrate the life of one of our most popular Antinoian prophets ... Saint Walt Whitman.

Walt Whitman was born on May 31, 1819, on the West Hills of Long Island, New York. He was lavished with love by his mother, but treated with stern discipline by his carpenter father.

After only a few years of school, Whitman was pulled out to help with the family earnings. He educated himself, reading all that he could, worked in a printing house, and eventually became a schoolteacher who taught with refreshing openness and excitement, allowing his students to call him by his first name. After years of teaching, he went into journalism, and in time was the editor of several publications.

However, Walt Whitman is said to have experienced a life-transforming epiphany. He left New York, and returned to live for a period with his family, then returned from isolation with Leaves of Grass, one of the most powerful collections of poems in American literature and the first to allude heavily to homosexual love.

It is often said that, during his time in isolation, a religious sense of purpose entered his heart, which he revealed in the Calamus poems.

The aromatic, psychotropic calamus plant with its phallic spadix flower pods was his symbol for homosexuality. The calamus has special meaning for us because Kalamos of Greek myth fell in love with the beautiful youth Karpos.

Like Antinous, Karpos died by drowning. Grief-stricken Kalamos wept among the reeds at the waterside until he was himself transformed into a reed, whose rustling in the wind is his sigh of woe.

When the American civil war broke out, Walt Whitman was 42 years old and served as a hospital nurse, falling in love with all the soldiers, especially those who died in his arms.

Open expressions of love between men were accepted without issue during the war, and it was when the visionary enlightenment of Walt Whitman became clear to him. He saw that the origin of this love, brotherly, or friendly perhaps, if not more, was the salvation of the human race, and certainly able to heal the divide between North and South.

His final years were spent communicating his message to the new torchbearers, such as John Addington Symonds and Edward Carpenter. After his death, and as Gay Liberation took strength, he was called a Prophet, particularly by the George Cecil Ives and the Order of Chaeronea.

We, adherents of the ancient/modern Religion of Antinous, proclaim him to be St. Walt Whitman the Prophet of Homoeros, and we elevate him to his own stratosphere in our devotion.

He died March 26th, 1892 of tuberculosis compounded by pneumonia. Over 1,000 mourners paid their respects. St. Walt told us how he wanted us to remember him, not as a great poet, but as "the tenderest lover":

You bards of ages hence! when you refer to me, mind not so much my poems,
Nor speak of me that I prophesied of The States, and led them the way of their Glories;
But come, I will take you down underneath this impassive exterior ... I will tell you what to say of me:
Publish my name and hang up my picture as that of the tenderest lover,
The friend, the lover's portrait, of whom his friend, his lover, was fondest,
Who was not proud of his songs, but of measureless ocean of love within him ... and freely poured it forth,
Who often walked lonesome walks, thinking of his dear friends, his lovers,
Who pensive, away from one he loved, often lay sleepless and dissatisfied at night,
Who knew too well the sick, sick dread lest the one he loved might secretly be indifferent to him,
Whose happiest days were far away, through fields, in woods, on hills, he and another, wandering hand in hand, they twain, apart from other men,
Who oft as he sauntered the streets, curved with his arm the shoulder of his friend  while the arm of his friend rested upon him also.