ON MOTHERING SUNDAY
WE REMEMBER THE MOTHER OF ANTINOUS 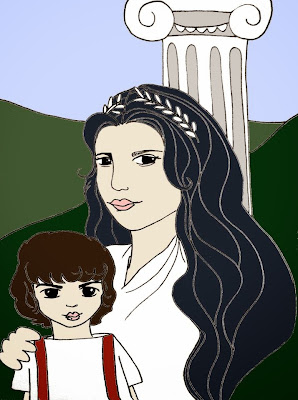 SUNDAY is Mother's Day in Britain and many countries in Continental Europe and the Americas.

Called MOTHERING SUNDAY in Britain, it is adapted from a pre-Christian Pagan calendar. In modern times it falls on the fourth Sunday of Lent, three weeks before Easter ... an adaptation of Pagan Equinox rites.

We take this opportunity to remember the mother of Antinous ... she proudly wraps her loving arm around her young son in this portrait by PRIEST JULIEN.

Little is known of the origins of Antinous except that he was from the Bithynian city of Claudiopolis modern-day Bolu, Turkey.

It has been speculated that he was a slave ... or even a provincial prince.