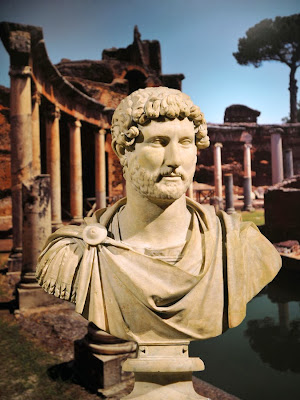 TODAY the Religion of Antinous commemorates the day in the year 131 AD when Hadrian returned from the journey to the East alone ... without Antinous ... with only his circle of companions as comfort.

He came back to Rome a grieving and broken man. The man who had spent his life traveling would never leave Rome or his Villa again. The remaining years of his reign would be marked by moodiness, capriciousness and a protracted conflict in the East.

But this sad ending was also a bright beginning ... the beginning of the new religion, a religion which was to incorporate all of Hadrian's hopes for a Hellenistic civilization based on love of art and beauty.

As Antonius Subia has written: "The Return of Hadrian to Rome is when the seed of the old religion of Antinous was delineated and implemented, and it is sacred as the occasion when the proliferation of images began. Hundreds of these images remain and are the guiding star of the New Religion of Antinous."

It was also at this time that the sacred precinct of the Villa of Tibur known as the Canopus with its long colonnaded pool was constructed, which is believed to be an architectural allegory of the Nile and the Divine Mystery of Antinous.

This day marks a turning point in the saga of Hadrian and Antinous. Hadrian returns to Rome a prematurely old and sick man. His active years died with Antinous. He sets about trying to cement his legacy.

A part of him died with Antinous. A new part was born.