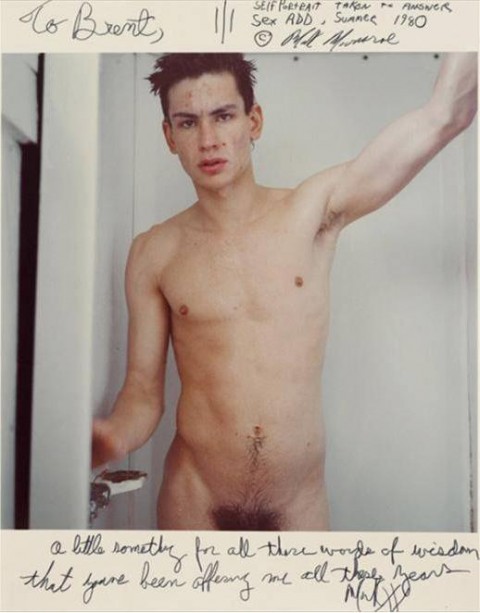 WE celebrate the life of punk performance artist and photographer Mark Morrisroe, Saint and martyr of Antinous.

Antinous is the god of "lost boys," and Saint Mark stands as a beacon of admonition but also of hope for future generations. A former teenage prostitute, drug addict, self-mutilation "cutter," cross-dresser, photographer and performance artist, he died from AIDS at age 30 in 1989.

Mark was an outlaw on every front -- sexually, socially and artistically. He was marked by his dramatic and violent adolescence as a teenage prostitute with a deep distrust and a fierce sense of his uniqueness.

When Nan Goldin met him in Art School in 1977, he left fesces in her mailbox as a gesture of friendship. Limping wildly down the halls in his torn T-shirts, calling himself Mark Dirt, he was Boston's first punk.

He developed into a photographer with a completely distinctive artistic vision and signature. Both his pictures of his lovers, close friends, and objects of desire, and his touching still-lifes of rooms, dead flowers, and dream images stand as timeless fragments of his life, resonating with sexual longing, loneliness, and loss.

Mark later said, "It kills me to look at my old photographs of myself and my friends. We were such beautiful, sexy kids but we always felt bad because we thought we were ugly at the time. It was because we were such outcasts in high school and so unpopular. We believed what other people said. If any one of us could have seen how attractive we really were we might have made something better of our lives. I'm the only guy that I know who wanted to run away to be a prostitute."

Flamen Antinoalis Antonyus Subia says: "What a genius…We love him… and we consecrate him as a Saint of Antinous…may his name live forever and ever, may he take his eternal place with Antinous on the Sacred Boat of Millions of Years."
Posted by Hernestus at 9:00 AM