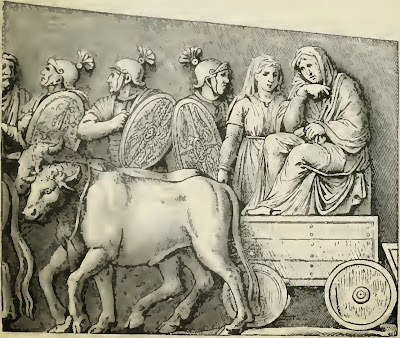 HADRIAN spent most of his reign traveling to far-flung provinces, often with Antinous at his side.

Imagine the size of the entourage that wound its way over the Roman roads. It was a veritable traveling palace ... thousands of people, carts, cavalry soldiers, the Imperial Guard, impressive conveyances for the Imperial coterie. 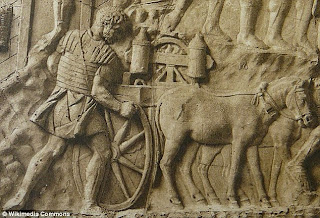 The entourage would have spread out for many miles, drawling onlookers from far and wide ... crowds pressing along the sides of the road ... hoping for a glimpse of Hadrian and his Beloved Boy.

But it was not all pomp and pageantry. Travel along Roman roads was fraught with traffic jams, speed demons and reckless cargo freighters ... every journey was perilous.

The Roman satirist Juvenal lampooned Roman road travel in these lines. For the full text, check our our friends at THE PETRIFIED MUSE.

Here is a short, edited version:

When duty calls, the crowd gives way as the rich man’s litter,
Rushes by, right in their faces, like some vast Liburnian galley,
While he reads, writes, sleeps inside, while sped on his way:
You know how a chair with shut windows makes you drowsy! 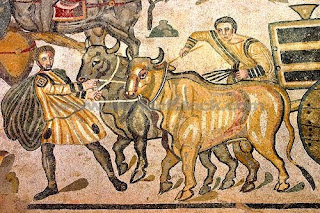 Yet, he gets there first: as I hasten, the tide ahead obstructs me,
And the huge massed ranks that follow behind crush my kidneys;

This man sticks out his elbow, that one flails with a solid pole,

This man strikes my head with a beam, that one with a barrel.

Legs caked with mud, I’m forever trampled by mighty feet
From every side, while a soldier’s hobnailed boot pierces my toe.

Now, if that axle breaks under the weight of Ligurian marble,
And spills an upturned mountain on top of the dense crowd,
What will be left of the bodies? What limbs, what bones will
Survive? Every man’s corpse wholly crushed will vanish along
With his soul.

(He) Is now a newcomer on the banks of the Styx, shuddering there
At the hideous ferryman, without hope, poor wretch, of a ride
Over the muddy river, and no coin in his mouth for the fare.