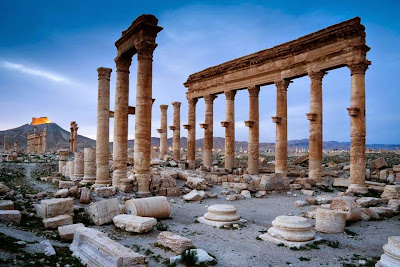 DAESH Islamic State militants swept into the desert city of Palmyra in central Syria on Wednesday, and by evening were in control of it, residents and Syrian state news media said.

The sad victory over this city which Hadrian and Antinous visited in its heyday gives DAESH another strategically important prize after the group devastated art treasures at Nimrud, Hatra and Nineveh in recent weeks.

PALMYRA, with its grand complex of 2,000-year-old colonnades and tombs, is one of the world’s most magnificent remnants of antiquity. But for the fighters on the ground, the city of 50,000 people is significant because it sits among gas fields and astride a network of roads across the country’s central desert.

Control of Palmyra gives the Islamic State command of roads leading from its strongholds in eastern Syria to Damascus and the other major cities of the populated west, as well as new links to western Iraq, the other half of its self-declared caliphate. 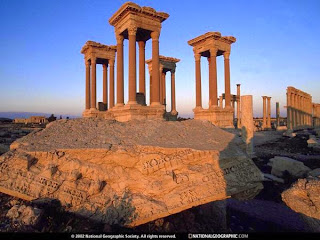 As they have swept across Syria and Iraq, Islamic State fighters havedestroyed or damaged numerous ancient sites and sculptures, condemning them as idolatry in slickly produced recruitment films, even as they pillage and sell off more portable items to finance their activities.

That has raised fears both locally and internationally that Palmyra, a United Nations world heritage site, could also suffer irrevocable damage.