DO YOU WANT FRIES AND A SHAKE
WITH THAT ISICIA OMENTATA? 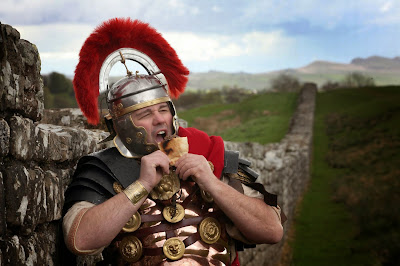 THERE's a theory that the Romans introduced the hamburger to Britain, and that theory will be put to the test on Hadrian’s Wall at the weekend.

Specialist group Taste of History will be using a 1,500-year-old Roman recipe for what very much looks like a modern burger.

Visitors to Birdoswald fort at Gilsland on the Northumberland-Cumbria border will be able to sample the result from 11am-2pm on Saturday. Roman Centurion Joe Jackson (photos courtesy THE CHRONICLE) will be on hand to help flip burgers. 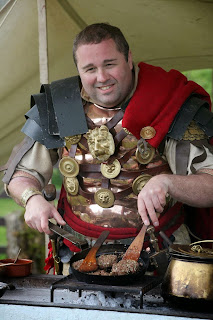 English Heritage may be tempted to temporarily change the fort’s name to Burgoswald as the Roman group cooks up its Magnus Macus.

“Street food became available en masse, including Isicia Omentata, what can be seen as the Roman forefather to today’s burger.

“This ‘burger’ was decidedly more upmarket than many of today’s offerings, and is richer and more complex than the plain beef version most common today.”

There would have been plenty of demand in Roman times with constant traffic along the Wall between forts, garrisons of up to 1,000 men at some of the bases and a cosmopolitan mix of people from across the empire. 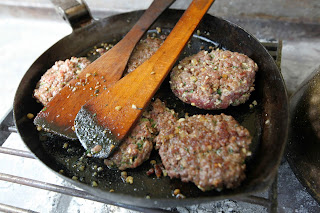 There were also the civilian settlements outside some of the forts.

It has long been known that the Romans brought fast food joints ... or thermopolia as they called them ... to Britain.

A recipe from the surviving ancient Roman cookbook, Apicius, details an item called Isicia Omentata which comprises minced meat, pepper, wine, pine nuts, and a rich fish based sauce called GARUM, all formed into a patty. 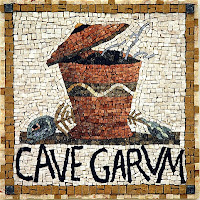 This is what will be served up at Birdoswald for the first time in many centuries.

The pattie will be cooked over an open fire and served in a bun for visitors to decide for themselves whether the Roman burger beats its modern day counterparts.

Frances McIntosh, English Heritage curator based at Corbridge Roman site in Northumberland, said: “This weekend visitors to Birdoswald Roman Fort can have a taste and decide for themselves whether the Romans brought the first ‘burger’ to Britain. 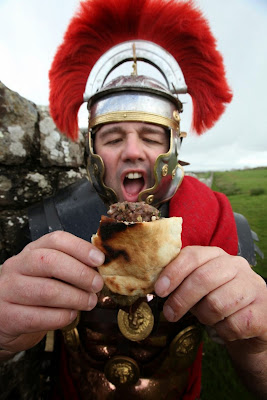 “Having access to convenient food was vitally important as they patrolled the frontier.

“Garrisons in the fort did not have the mess halls we see in modern military bases and they would probably have taken the opportunity to save time cooking by buying fast food.

“At Corbridge there is evidence of open fronted shops which may have sold such food.

“We know that the Romans imported items like fish sauce and wine to Hadrian’s Wall.”

The sauce was made by fermenting fish, including innards. But Taste of History is playing safe with a pasteurised Vietnamese fish sauce with added vinegar.