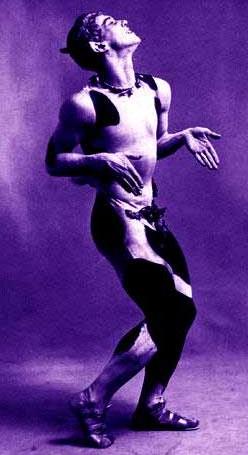 ON April 8th the Religion of Antinous honors St. Vaslav Nijinsky, the greatest gay ballet dancer/choreographer of all time, who died on this day in 1950 in an insane asylum.

He was a living Antinous who innately understood our religion's idea of Homotheosis ... Gay-Man-Godliness-Becoming-the-Same.

Homotheosis can only be accomplished by a self-inflicted act of faith after the example of Antinous.

One must deny this mortal existence of death and decay, which existence is rightfully called transient, and cast the mortal self into the rushing waters of the Nile that flows within the veins and arteries of our true, perfect, interior self. A body that is the same as and as beautiful as the marble flesh of Antinous the Gay God.

This is not turning away from life, but turning to it for the very first  time, and finding the light of the Unconquered Sun that has always shone within.

One of this religion's favorite Hadrian and Antinous stories is the tumultuous love affair between Vaslav Nijinsky and Sergei Diaghilev. Nijinsky completely changed ballet, inventing what we now consider to be modern dance. Of course he was out of his mind, and after his relationship with Diaghilev ended, he went certifiably insane and spent the rest of his life in an asylum.

Vaslav Fomich Nijinsky was born in Kiev on March 12th, 1888. Both his parents were ballet dancers, and Vaslav was introduced to the stage as a child. When he was a 18 he became the lover of Prince Paul Dmitrievitch who then introduced him to Sergei Diaghilev, the ballet impresario, whose lover he became in 1908.

Diaghilev took Vaslav to Paris where he was starting the famous Ballet Russe, an experimental production company that brought together the finest composers of the day with the most innovative scenery artists, costumers, and of course the greatest ballet dancers in the world.

The volatile relationship between the teenage Nijinsky and the 40-year-old Diaghilev led to the some of ballet's most profound and moving works. Nijinsky was the male star of the Ballet Russe, but he soon showed that his true talent lay in choreography. His debut as a choreographer came when he was 21 in the short piece entitled L'aprés-midi d'un Faune (Prelude to the Afternoon of a Fawn) with music by Claude Debussy, in which Nijinsky starred as the lustful faun trying in vain to seduce a group of nymphs.

But that was nothing compared to the riots that broke out after his next choreography for the orgiastic Le Sacre du printemps (The Rite of Spring).

The style of Vaslav Nijinsky was far ahead of his day. He revolutionized the ballet and single-handedly invented what we call modern dance, rejecting the stylistic forms passed down by tradition in favor of sensuality, odd gestures and unnatural movement that was totally infused with the grace and power of the feel of music.

The relationship between Nijinsky and Diaghilev broke down over time and they separated. Nijinsky married a female fan he had only met once ... simply to spite Diaghilev. But he was slowly succumbing to mental illness, and would eventually lose his mind completely. 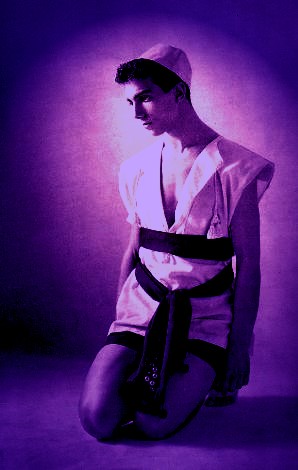 He wrote a bizarre diary in the few weeks before he was taken away to  spend the rest of his life in various mental institutions. The genius of Vaslav Nijinsky, who was taken as a stupid person because of his shy and quiet demeanor, was revealed in his divine power of dance and in the sublimity of his strange diary.

Here is an excerpt, you'll notice the way that he rambles just barely able to communicate his wandering mind. Nijinsky was already leaving this world and becoming an immortal. He signed the last page, Nijinsky, the God.

"One day in the streets of Paris I pushed [Diaghelev] in order to show him that I was not afraid of him. Diaghelev hit me with his stick, as I wanted to go away from him. After this we lived for a long time together. I loved the Ballets Russes. I gave my whole heart to it. I worked like an ox. I lived like a martyr. I lived sadly and sorrowed alone. I wept alone. I loved my mother and wrote her letters every day. I was afraid of life, because I was very young. I could not go on composing the ballet 'Jeux.' It was a ballet about flirting and unsuccessful, as I had not feeling for it. The story of this ballet is about three young men making love to each other. I began to understand life when I was 22 years old. I composed this ballet alone, too. Debussy, the well-known composer, wanted the subject to be written down.

"Diaghelev likes to say that he created the ballet, because he likes to be praised. I do not mind if Diaghelev says that he composed the stories of 'Faune' and 'Jeux,' because when I created them, I was under the influence of 'my life' with Diaghelev. The Faune is me and Jeux is the life which Diaghelev dreamed. Diaghelev wanted to make love to two boys at the same time and wanted these boys to make love to him. In the ballet, the two girls represent the two boys, and the young man is Diaghelev. I changed the characters, as love between three men could not be represented on the stage'"

The Parisians called him the God of Dance, and toward the end of his diary, he signed his name, Nijinsky, the God. He died in a London clinic on April 8, 1950.

We consecrate him as a Saint and as a living incarnation of Antinous/Pan/Dionysus. St. Vaslav Nijinsky, who knew how to live  Homotheosis every single blessed day of his life ... which means living daily the Divine Spirit of Being Gay ... and who knew how to express this ineffable spirit in dance as well.