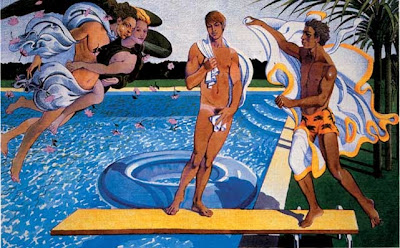 When Saturn castrated his father Uranus, and separated the sky from the earth, by cutting away the testicles of heaven, Venus, the Great Goddess of Love was born, where the foam of the testicles washed ashore on the island of Cyprus.

She was attended by the Erotes, the spirits of desire, as seen in this image: "D'après Botticelli" 1984, acrylic on canvas, by the noted Italian artist, Marco Silombria. Soon afterwards she created the three Graces.

She was brought into Olympus by marrying Vulcan, the smith god, but Venus is an older, and more powerful than the Olympians, except for Zeus, because she is directly descended from Uranus, the heavens.

Venus shared her love with almost all the gods, to the humiliation of Vulcan, Juno's son, but her most ardent desire was for the war god Mars, whose virile masculinity is in direct contrast to her voluptuous feminine grace.

Together Mars and Venus fought for the Trojans against the other jealous goddesses, and though Zeus gave victory to the Greeks, he promised Venus that her chosen people would have their revenge.

So it was that Venus guided her son Aeneus and his followers out of the burning city and across the world to the place where Rome would one day stand. The descendants of the Trojan refugees and of Mars were Romulus and Remus who founded Rome, whose sons, through War and Love would conquer the world.

Julius Caesar claimed to be descended from Venus through Aeneus, and so she became the guardian spirit of the Emperors.

In the year 135 Hadrian dedicated the Temple of Venus and Roma. Hadrian built one of the largest Temples in Rome for the Great Goddess of Love and for the Spirit of the Deified City.

Hadrian intended with this Temple to proclaim to the Romans that the Empire was the child of Love and War, but that Love, through the Goddess Venus, was to be the foremost power. We dedicate this day to Venus Urania, who blesses homosexual love.