WE CELEBRATE THE MEGALENSIA
GREAT MOTHER OF THE GODS 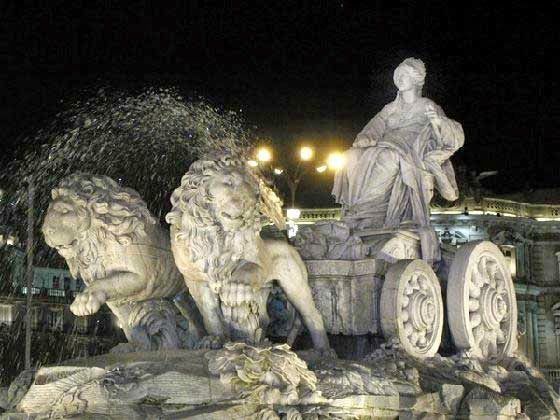 AT the Megalensia we celebrate the introduction of the Cult of Magna Mater, the Great Mother of the Gods, into Rome.

During the War with Hannibal, the Senate consulted the Sibilline Book and received an oracle instructing them to bring the Great Mother of Phrygia to Rome.

They sent an embassy to the city of Pessinus and amazingly, the Phrygian priests freely handed over the black heavenly Stone that was the most sacred emblem of their goddess.

The Black Stone was brought to Rome, and met at the port of Ostia by a large congregation of the matrons of the city. They carried her in their arms, from one lady to another, into the city.

Within a year, Hannibal left Italy and was soon defeated. So it was that Magna Mater became one of the guardians of Rome.

The religion of Magna Mater is one of the oldest faiths of mankind, extending far back into prehistory. Evidence has been found of her veneration in one of the oldest human settlements known as Catal Huyuk in modern Turkey.

The image above shows a mother figure on a chariot drasn by two lions, an image always central to the Great Mother. 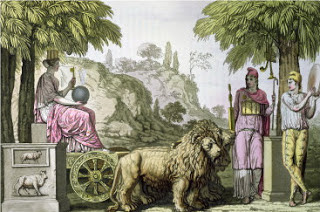 She was known under several names, Idea, Dydima, Sipyla, Agdistis, Rhea, Kubaba, Khaba, Khabala, and Cebele, daughter of Uranus and Gaia, wife of Saturn, mother of all the gods.

It is believed that her religion was spread throughout the Middle East during the conquests of the Hittite Empire, led by eunuch priests headed by the Archigallus, who was the earthly representative of the divine consort Attis.

The sacred shrines of the goddess were established where a black stone had fallen from heaven, and there a prophetess, known as a Sybil took up residence, speaking oracles from Apollo. The religions of Dionysus, Apollo, Diana and Persephone are deeply and intimately related, through their connection to Magna Mater.

They are the vestiges of a faith and culture that long preceded Greece, yet whose traces remain even now, in the concept of Holy Mother Church, in the black stone embedded in the Khaba at Mecca, and as the spirit of the Holy Tree known as the Kabalah in Jewish mysticism.

Antinous was very probably brought up as a devotee of her religion, since Bithynion had a mountaintop shrine to Attis, and was very near to the center of her worship at Pessinus.

We adore and venerate the Great Mother on this day, as the savior of Rome, and as the Goddess whose religion was central to the formation of the young Antinous, who is the New Attis.

The bisexuality of her incarnation as Agdistis, and the transvestitism of her priesthood makes her religion of extreme importance to the concept of Homo Deus and of the New Religion of Antinous.