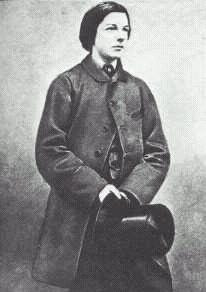 THE Religion of Antinous honors St. John Addington Symonds, the English poet and literary scholar who shocked Victorian sensibilities by openly promoting the cause of same-sex love.

John Addington Symonds was born on 5 October 1840, to a wealthy middle-class family in Bristol England. His father was a liberally minded doctor with connections and close friendships with many of the most illustrious and forwards minds of the time.

It was this environment of Victorian middle-class sexual repression that caused John Addington Symonds to blossom into one of the first and most prolific proponents for the cause of love between men.

While teenager in school, he was awakened by Plato to the awareness of love between boys among his schoolmates and almost immediately and unhesitatingly came out of the closet, even to his father, who was initially dismayed but ultimately supportive.

From then on, Symonds devoted his entire life to the study of homosexuality through art and history. He was the most pronounced defender of the ancient and glorious legacy of love between men, and a champion of social change.

He was a deep admirer of Walt Whitman, and later worked closely with Edward Carpenter, and Dr. Magnus Hirschfeld, co-founding the British Institute for Sexual Science, which advocated a methodical study to overturn the laws against homosexual love.

For his life-long work and devotion, and for his early recognition and exultation of his sexuality, John Addington Symonds is a canonized Saint of the Religion of Antinous.