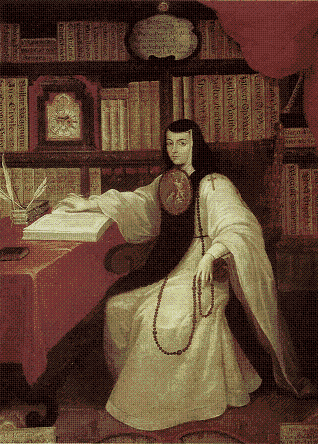 She was exceptional not only for her intelligence and beauty, but also because she wrote literature centered on intellectual and sexual freedom.

In the poem "Redondillas" she defends a woman's right to be respected as a human being. "Hombres necios" (Stubborn men) criticizes the sexism of the society of her time, and pokes fun at men who publicly condemn prostitutes, among other things, but privately hire them.

She also has a philosophical approach to the relative immorality of prostitution. This was exemplified when she posed the question, "Who sins more, she who sins for pay or he who pays for sin?"

In the romantic comedy entitled "Los empeños de una casa" about a brother and a sister entangled in a web of love, she writes using two of her most prominent themes, love and jealousy.

She did not moralize, but rather, in the spirit of her lifetime interests, inquired of how these deeply emotional matters shaped and carved a woman's pursuit of liberty, knowledge, education and freedom to live her life in self-sovereignty.

Her revolutionary writings brought down upon her the ire of the Roman Catholic Church at the end of the 17th Century. She was ordered to tone down the sexuality of her writings. She did not.

However, powerful representatives from the Spanish court were her mentors and she was widely read in Spain, being called "The Tenth Muse". She was lauded as the most prominent poet of the post-conquest American Continent. Her work was printed by the first printing press of the American Continent in Mexico City.

She is believed to have penned 4,000 works, but only a few have survived. They were rescued by the Spanish Viceroy's wife, who was rumoured to be her female lover. In April 1695, after ministering to the other sisters struck down by a rampant plague, she is said to have died at four in the morning on April 17th.

For her love of learning and her devotion to the beauty of sexuality and for her courage to write about controversial things in the face of the Spanish Inquisition, we honor Saint Sor Juana as a Prophet of Homoeros.