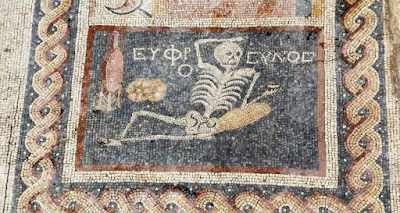 A 2,400-year-old mosaic in Antioch shows a drunken skeleton admonishing the living to eat, drink and be merry … for one day they shall join him in death.
It is possible that Antinous and Hadrian saw the remarkably intact mosaic, because it was found in the ruins of the dining room of a wealthy person's home in Antioch ... and they spent several months in that city on their tour of the Eastern Provinces in 129-130 AD.
It was found by accident during excavation construction work for a cable-car route in the modern city of Antakya … built partly over the suburbs of ancient Antioch in what is now Turkey's Hatay Province.
Excavations were then launched to search the area for more remains.
The mosaic shows a skeleton reclining on a cushion with a kylix drinking bowl in his left hand and its right arm thrown drunkenly over his head, with legs crossed. 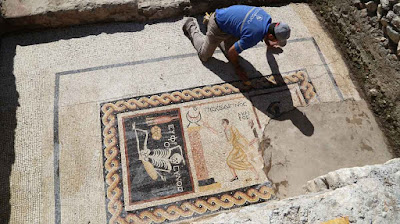 Next to the skeleton, two loaves of bread are strewn on the floor and a large amphora of wine waits to refill his drinking bowl.
A Greek inscription says: "Be merry ... enjoy being alive," according to archeologist Demet Kara at Hatay Archeology Museum.
Kara further noted that professors have referred to the mosaic as the 'skeleton mosaic' and have concluded that the mosaic belonged to the dining room of a house belonging to the upper class back then.
She noted that there is a similar mosaic in Italy, but this one is more comprehensive, making it a unique piece.
The ancient city of Antioch was established by Seleucus I Nicator … who is one of Alexander the Great's generals ... in the 4th Century BC.
Hadrian and Antinous visited Antioch, so it is possible that they saw this mosaic at some point in their extended stay over a period of several months.
Hatay is known for its Roman-era mosaics dating back to the 2nd and 3rd Centuries BC.
Posted by Hernestus at 12:00 AM