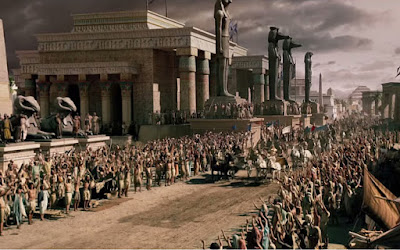 EGYPTIAN archaeologists led by Dr. Zahi Hawass have found a "Lost Golden City" in Western Thebes, proving once again that the sands of Egypt still hold many secrets ... possibly also the Lost Tomb of Antinous.

The sprawling city, with sinusoidal or curvileanear walls, was the hometown of artisans working at nearby temples and tombs. Incredibly, pots and jars and cooking utensils and artists' tools were found in striking states of preservation.

"It has glorious sinusoidal walls, and looks as if people had just got up and left ... a real Egyptian Pompeii," says Egyptologist Salima Ikram. "There are pots and grinding and cooking emplacements, areas where amulets were made, and people laboured. It is the most important urban find since the discovery of Tell el Amarna!"

Hawass says the city was called: "The Rise of Aten." The city is 3,000 years old, dates to the reign of Amenhotep III, and continued to be used by Tutankhamun and Ay.

"Many foreign missions searched for this city and never found it. We began our work searching for the mortuary temple of Tutankhamun because the temples of both Horemheb and Ay were found in this area," Hawass said.

The Egyptian expedition was surprised to discover the largest city ever found in Egypt. Founded by one of the greatest rulers of Egypt, king Amenhotep III, the ninth king of the 18th dynasty who ruled Egypt from 1391 till 1353 B.C, this city was active during the great king’s co-regency with his son, the famous Amenhotep IV/Akhenaton. 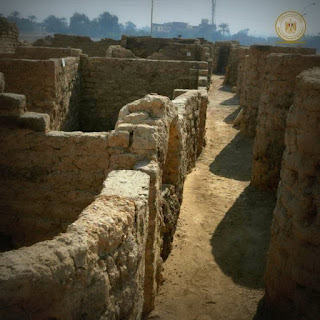 It was the largest administrative and industrial settlement in the era of the Egyptian empire on the western bank of Luxor.

"The city’s streets are flanked by houses, of which some of their walls are up to 3 meters high," Hawass says. "We can reveal that the city extends to the west, all the way to the famous Deir el-Medina."

Betsy Brian, Professor of Egyptology at John Hopkins University in Baltimore USA, says, "The discovery of this lost city is the second most important archeological discovery since the tomb of Tutankhamun. The discovery of the Lost City, not only will give us a rare glimpse into the life of the Ancient Egyptians at the time where the Empire was at his wealthiest but will help us shed light on one of history's greatest mystery: why did Akhenaten & Nefertiti decide to move to Amarna," Brian adds.

The excavation area is sandwiched between Rameses III's temple at Medinet Habu and Amenhotep III's temple at Memnon. The Egyptian mission started working in this area in search of Tutankhamun’s Mortuary Temple.

Tutankhamun's successor, King Ay, built his temple on a site which was later adjoined on its southern side by Rameses III’s temple at Medinet Habu. 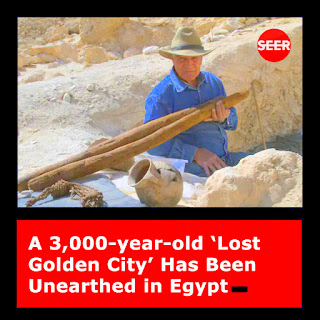 Egyptologists believe Ay's temple may formerly have belonged to Tutankhamun as two colossal statues of the young king were found there. The northern part of the temple is still under the sands.

The excavation started in September 2020 and within weeks, to the team's great surprise, formations of mud bricks began to appear in all directions. What they unearthed was the site of a large city in a good condition of preservation, with almost complete walls, and with rooms filled with tools of daily life.

The archaeological layers have laid untouched for thousands of years, left by the ancient residents as if it were yesterday. 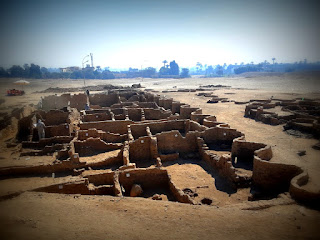 The first goal of the mission was to date this settlement. Hieroglyphic inscriptions found on clay caps of wine vessels.

Historical references tell us the settlement consisted of three royal palaces of King Amenhotep III, as well as the Empire's administrative and industrial center.

A large number of archaeological finds, such as rings, scarabs, colored pottery vessels, and mud bricks bearing seals of King Amenhotep III’s cartouche, confirmed the dating of the city.

After only seven months of excavation, several areas or neighborhoods have been uncovered.

In the southern part, the mission found a bakery, a cooking and food preparation area, complete with ovens and storage pottery. From its size, we can state the kitchen was catering a very large number of workers and employees.

The second area which is still partly uncovered, is the administrative and residential district, with larger and well-arranged units.