WE JOYOUSLY CELEBRATE THE FLORALIA 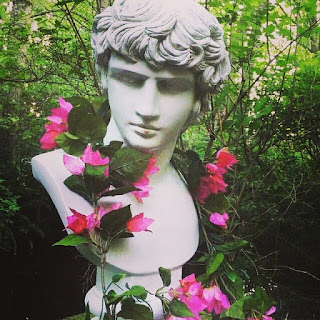 ANTINOUS assuredly took part in the Floralia, a multi-day Roman feast which started on April 27th in the Republic era, but which began on April 28th in the Imperial era when the Beauteous Boy lived during the reign of Emperor Hadrian.

This day was the start of the Floralia, the Roman festival of Flora, goddess of flowers, actors, sex workers, comedies, comic theatre.

The festival had a licentious, pleasure-seeking atmosphere. In contrast to many festivals which had a patrician character, the Games of Flora were plebeian in nature.

New comedy plays premiered in the theatres. There may have been nocturnal observances, since sources mention measures taken to light the way after the theatrical performances. 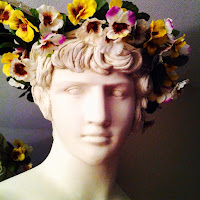 In contrast to the Cerealia, when white garments were worn, bright and colorful clothing was customary during the Floralia.

There was dancing and revelry of every sort. Ovid says that hares and goats ... animals considered fertile and salacious ... were ceremonially released as part of the festivities.

Persius says that the crowd was pelted with peas, beans, and lupins ... all of them also symbols of fertility.

Professional sex workers participated in the Floralia as well as the wine Vinalia festival which commenced on April 23.

According to the satirist Juvenal, prostitutes danced naked and fought in mock gladiator combat.

Adorn yourself and your home. Make libations of milk and honey to Flora and to Antinous.