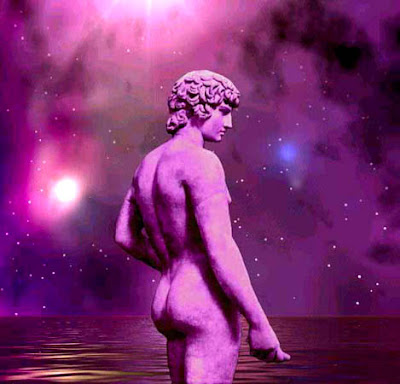 ON JULY 25 the Religion of Antinous joyfully commemorates the First Miracle of Antinous — the Bountiful Inundation of the Nile which ended a drought which had caused food shortages throughout the Empire.

The famine had overshadowed the tour of Egypt by the Imperial entourage in the year 130. The half-starved Egyptians looked to Hadrian, whom they worshipped as pharaoh, to perform a miracle which would end their misery.

But as Hadrian and Antinous traveled up the Nile during the summer and autumn of 130, the Nile once again failed to rise sufficiently to water the fields of Egypt — Rome's "Bread Basket" and chief source of grain and other staple foodstuffs.

It was a humiliating disappointment for the Emperor following the jubilant welcome by peoples during the earlier part of his tour through the Eastern Empire. In Ephesus and other cities he had been welcomed as a living god.

But the Egyptians had given him and his coterie what little they had in the way of food and wine — and he had failed to convince the Inundation Deity Hapi to bless them with bounty. Hapi is one of the most extraordinary deities in the history of religion.

Hapi is special to us especially because Hapi is hermaphroditic. With many other such deities, the gender division is down the middle of the body (like some Hindu deities) or the top half is one gender and the bottom half is the other.

But Hapi is very complex and the genders are mixed throughout his/her body. Male deities invariably have reddish-orange skin in Egyptian Art and female deities have yellowish skin. Hapi has bluish-green skin. Hapi has long hair like a female deity but has a square jaw and a beard. Hapi has broad shoulders yet has pendulous breasts like a nursing mother. Hapi has narrow hips and masculine thighs, but has a pregnant belly. Nobody knows what sort of genitals Hapi has, since they are covered by a strange garment reminiscent of a sumo wrestler's belt.

Hapi is both father and mother to the Egyptians. Hapi provides them with everything necessary for life. As Herodotus wrote, "Egypt is the gift of the Nile". Hapi wears a fabulous headdress of towering water plants and she/he carries enormous offering trays laden with foodstuffs.

The Ancient Egyptians had no problem worshipping a mixed-gender deity. I think it is very important to draw the connection between Hapi and Antinous, especially since the First Miracle that Antinous performed as a god involved Hapi. The Egyptians accepted Antinous into their own belief system immediately and were among the most ardent followers of Antinous.

They had no problem worshipping a gay deity who had united himself with a hermaphroditic deity. It must have seemed very logical and credible to them.

It made sense to them and enriched their belief system, made it more personal since they could identify more easily with a handsome young man than with a hermaphrodite wearing a sumo belt (Hapi forgive me!).

Herodotus also said he once asked a very learned religious man in Egypt what the true source of the Nile was.

The learned man (speaking through an interpreter, since most Greeks never bothered to learn Egyptian) paused and finally told him the true source of the Nile is the thigh of Osiris.

So, a learned Egyptian would have assumed that a learned Greek would understand what was meant: That Hapi is the equivalent of Dionysus, who was "incubated" in the inner thigh of Zeus after his pregnant mortal mother Semele perished when she could not bear the searing sight of her lover Zeus in all his divine panoply.

It's a very poetic way (a very Egyptian way) of saying that the "true  source" of the Nile, which is to say Egypt itself, is the magical heka/semen from the loins of the original creator.

We will never know what happened during that journey up the Nile along the drought-parched fields with anxious Egyptian farmers looking to Hadrian for a miracle. All we know is that Antinous "plunged into the Nile" and into the arms of Hapi in late October of the year 130.

And then the following summer, Hapi the Inundation Deity provided a bountiful Nile flood which replenished the food stocks of Egypt — and the Roman Empire.

"The Dog Star Sirius appears, and the sacred Star of Antinous begins to approach its zenith in the night sky of the northern hemisphere. The appearance of the Dog Star once announced the rise of the Inundation of the Nile, though it no longer does due to the precession of the Equinox, which is the slight alteration of the position of the stars.

"After the Death and Deification of Antinous, the Nile responded by rising miraculously after two successive years of severe drought. It was on this day, July 25th, in the year 131 that the ancient Egyptians recognized that Antinous was a god, nine months after his death, following their custom of deifying those who drowned in the Nile, whose sacrifice insured the life-giving flood.

"The position of Orion, along the banks of the Milky Way, our galaxy in relation to Sirius is a mirror image of Pyramids along the bank of the Nile, which is the same relationship as Antinoopolis to the Nile, with the Via Hadriani, the road which Hadrian built across the desert to the East, linking the Nile with the Red Sea — Rome to India.

"We consecrate the beginning of the Dog Days of Summer to the advent of the Egyptian deification of Antinous and the miracle of the Inundation of the Nile."

The First Miracle of Antinous the Gay God is enshrined in the hieroglyphic inscription on the OBELISK OF ANTINOUS which stands in Rome.

The East Face of the Obelisk, which is aligned to the rising sun Ra-Herakhte, speaks of the joy that fills the heart of Antinous since having been summoned to meet his heavenly father Ra-Herakhte and to become a god himself.

Then the inscription tells how Antinous intercedes with Ra-Herakhte to shower blessings upon Hadrian and the Empress Sabina Augusta.

And Antinous immediately calls upon Hapi ...

Hapi, progenitor of the gods,
On behalf of Hadrian and Sabina,
Arrange the inundation in fortuitous time
To make fertile and bountiful, the fields
Of Both Upper and Lower Egypt!

We joyfully celebrate this, the First Miracle of Antinous!