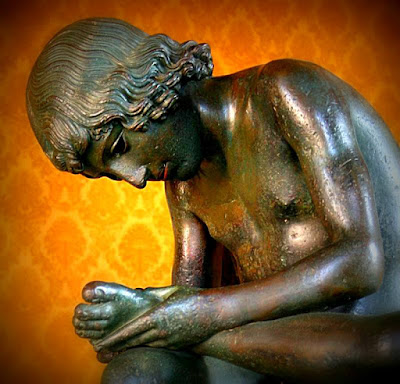 THE statue in the picture is not Antinous, but it seemed so appropriate to what I want to say about Antinous and his faith: That no other faith is as steeped in a sense of human and divine tragedy and in an extreme of sadness as the case of our God Antinous and his death as a mortal and as we believers try appreciate when we consider his final hours and his drowning in the Nile.
And no other deity or his faith so starkly proceeds to a relief and release from a sense of mortal sadness and human tragedy than Antinous after his death as a mortal and at his appearance in the Underworld and Afterlife when his character and soul affected the normal and usual estimations of the dead and of their souls and the lives they had lived so, that it shook the scales and touched the judges and as he subsequently won their estimation and allegiance and earned and was granted deification.
Christians believe Jesus tasted hell and ascended to heaven to sit at the hand of god. But Antinous' deification and apotheosis is singular and he did not live a life in which he already was the son of god predestined to be slaughtered.
He was human and his arrival in the afterlife was by his own hand. And yet he had to be judged before he earned divinity and godliness.
The triumph and release are all the more profound in Antinous. Where Jesus fought the devil, Antinous had to overcome his own mortality and humanity and sacrifice himself in the cause of an actual, human relationship and for the love between two persons and so for the love between all beings and deities.
Small wonder the Obelisk of Antinous suggests he has the seed of the Creator in him and had earned the love of the most powerful of Gods. He sits not by, he entered the world and ether as a most potent new kind of being.
The gods themselves were reborn through Antinous.
I don't know, but the statue of the youth in the picture seems to depict him as if afflicted by a thorn, golden youth brought to a standstill by something small, minute in the world, yet consequential and fateful stabbing and pointing at him in his very course through the world and bringing the youth to a contemplative standstill.
For once, the statue in my picture isn't of Antinous, but of a statue that I believe Antinous likes.
Ave Antinous!
ADRIAAN VAN DEN BERG
Posted by Hernestus at 12:00 AM