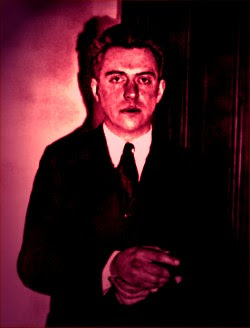 ON JULY 21 the Religion of Antinous honors St. Hart Crane (July 21, 1899 — April 27, 1932) a great and openly gay American poet whose poetry was considered "beyond comprehension" by straight readers but which is easily understood by gays.

He was one of the most influential poets of his generation, but — like so many gay men — was plagued by doubts and low self-esteem and feelings of failure.

Crane was gay and he considered his sexuality to be an integral part of his life's mission as a poet. Raised in the Christian Science tradition of his mother, he was never able to shake off the feeling that he was an outcast and a sinner.

However, as poems such as "Repose of Rivers" make clear, he felt that this sense of alienation was necessary in order for him to attain the visionary insight that formed the basis for his poetic work.

He wanted to write the great American epic poem. This ambition would finally issue in The Bridge (1930), where the Brooklyn Bridge is both the poem's central symbol and its poetic starting point.

The Bridge got mostly bad reviews, but much worse than that was Crane's sense that he had not succeeded in his goal. It was during the late '20s, while he was finishing The Bridge, that his heavy drinking got notably heavier. The partial failure of the poem perhaps had something to do with his increasing escape into booze.

While on a Guggenheim Fellowship in Mexico in 1931-32, his drinking continued while he suffered from bouts of alternating depression and elation. His only heterosexual affair, with Peggy Cowley, the wife of his friend Malcolm Cowley, was one of the few bright spots. And "The Broken Tower", his last great lyric poem (maybe his greatest lyric poem), emerges from that affair. But in his own eyes, he was still a failure.

Crane was returning to New York by steamship when, on the morning of April 26, 1932, he made advances to a male crewmember and was beaten up. Just before noon he jumped overboard into the Gulf of Mexico. His body was never found.

Here is a poem which straight people found inscrutable and obscure, but which gay readers understood was about anonymous gay sex:

INTERIOR
It sheds a shy solemnity,
This lamp in our poor room.
O grey and gold amenity, --
Silence and gentle gloom!
Wide from the world, a stolen hour
We claim, and none may know
How love blooms like a tardy flower
Here in the day's after-glow.
And even should the world break in
With jealous threat and guile,
The world, at last, must bow and win
Our pity and a smile.