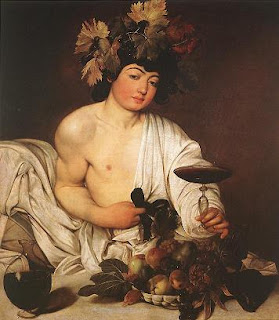 ON JULY 18th the Religion of Antinous honors Saint Caravaggio.

Michelangelo Merisi da Caravaggio, who died under suspicious circumstances on this day in 1610, was an extraordinary painter whose homoerotic images of young men have caused art historians to call him the first modern painter.

St. Caravaggio is the Patron of Gifted Bad Boys — Gay Boys who are blessed with incredible talents but who are too impatient and too rebellious to abide by the rules of society.

St. Caravaggio was always in trouble. In 1592, when he was not yet 20 years old, he fled Milan after a series of brawls and the wounding of a police officer. He went to Rome and was there, for the most part, until 1606, when he again had to flee. His life in Rome was of growing financial and professional success, but it was also punctuated with crime.

In the years 1600-1606 alone, he was brought to trial no less than eleven times. The charges covered a variety of offenses, most involved violence. It is significant that, despite his reputation for homosexuality, and his endless brushes with the police, he was never charged with sodomy, then a capital offense.

But he was charged with murder. On 29 May 1606 he killed one Tommasoni in a brawl after a disputed game of royal tennis, and had to flee to escape execution. He went first to Naples, then to Malta, where he was feted and made a Knight of St John.

Then, after "an ill considered quarrel" with a senior knight, he was on the run once more, all around Sicily, then on to Naples again.

But this time there was no hiding place. The knights, known for their relentlessness, pursued him, and Caravaggio, now 39 nine, in an attempt to seek forgiveness and refuge in Rome, tried to get there, but died at Porto Ercole, apparently of a fever, though the circumstances are highly suspicious.

Despite his hunted and, in the end, desperate life, he always managed to go on painting, often without a proper workshop of any kind. He was variously described, even by admirers, as a man of "stravaganze" as "uno cervello stravagantissimo" (exceptionally odd) and a "cervello stravolto".

His father died when he was six, his mother when he was 18, which may help to explain his anger at the world. His paintings show that he was a man of the most profound religious convictions, of a humble and contrite heart, and with a fanatical devotion to his art. 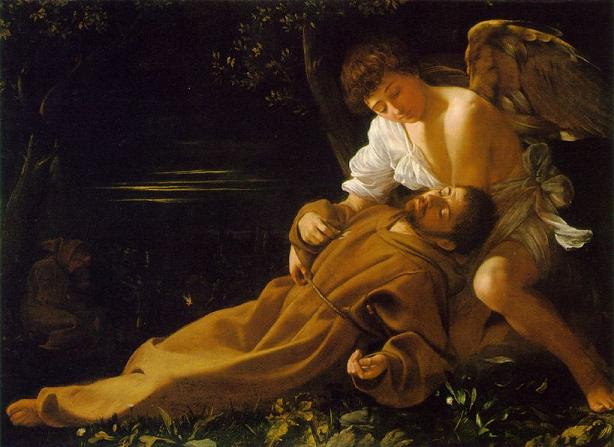 His fundamental ideas were always absolutely clear, though he continually changed and improved his techniques. He believed in total realism, and he always painted from life, dragging poor people in from the street if need be.

He became a great realist by painting flowers and fruit, in a variety  of lights, sometimes pure still lifes, sometimes with street boys, such as the model for Bacchus (above).

To achieve realism, he liked to pull his subject out of surrounding darkness into strong lateral or overhead light, as close to the viewer  as possible.

This was a new kind of art, which was to have momentous consequences. It has led some modern writers to speculate that, born into the 20th or 21st Century, Caravaggio would have been a photographer or a filmmaker.

But that is nonsense. Caravaggio, it is clear, adored the feel and line of a brush on a slightly springy surface, prepared with grey (as a rule), and the sheer creative excitement of using the brush to bring the real world out of the darkness of the canvas.

For the first time in the history of art, Caravaggio eliminated the space between the event in the painting and the people looking at it. He created a kind of virtual reality to give you a feeling as though you are right there inside the painting.

Even we, whose vision and sense of reality has been blunted and distorted by television and the cinema, still get tremendous impressions of participating when we see his great canvases close up. What then must it have been like in the early seventeenth century, for people who had never come across anything approaching this blast of actuality, to be brought face-to-face with a reenactment of sacred events in two dimensions, such as St. Francis of Asisi in Ecstasy?

Artists were particularly struck, or perhaps shocked is a better word, but horribly stimulated too, and stirred to find out exactly how the man did it.

Caravaggio, despite all his difficulties, always finished each piece of work if he possibly could, then went directly on to another, with  fresh ideas and new experiments.

He was a Bad Boy. But he was a gifted genius. The Religion of Antinous honors this Patron of Gifted Bad Gay Boys as an exemplar and saint. Let us lift our glasses to St. Caravaggio.