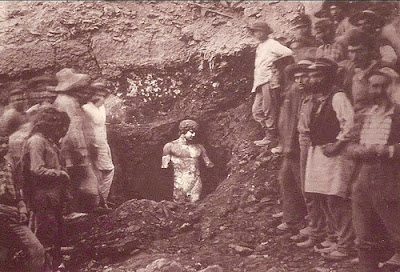 ON July 1st, 1894, this historic photograph was taken of the discovery of one of the most beautiful statues of Antinous ever found.

French archaeologists were in the process of uncovering this statue at the Temple of Apollo at Delphi in Greece when the photographer asked the diggers to pose for posterity.

Hadrian and Antinous visited Delphi and were initiated into Mysteries.

The Delphi Antinous statue was found standing perfectly upright, which indicates that it had been very carefully buried by the priests so as to protect it from marauding Christians. Apparently this statue was considered to be very special.

There are many larger-than- life statues of Antinous. And there are many busts. But the Delphi is one of the few life-size statues, and Johnston said it is possible that it was indeed modeled from the living Antinous. 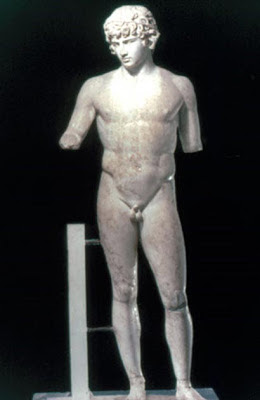 If that was indeed the case, then it is possible, according to John J Johnston, a leading expert on Antinous, that Antinous was 5-foot-8 (173 cms) in height.

Owing to the long exposure time, the photographer asked the workmen to stand still (or as still as possible) for what must have seemed like an eternity to these simple men (one or two looking like a young Antinous) while the shutter was open.

This photo is one of the most emotionally touching portraits of ANTINOUS THE GAY GOD. It proves that the Ancient Priests of Antinous took special care to hide their precious statue from the barbarians. They didn't just dump Him into a hole -- they carefully buried Him standing upright with dignity!!

The photo is superb ... Antinous stands eternally in focus in the center ... the mortal men are blurred like the flames of votive candles which flicker briefly and go out ... only Antinous endures.

One young Antinous-looking man's face is in focus ... representing those few mortals who look into the Mysteries of Antinous....