THE DAY HADRIAN WAS DECLARED
EMPEROR OF ROME 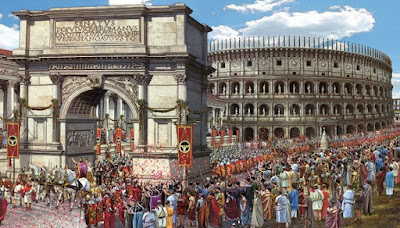 ON JULY 9th we commemorate the Ascension and Consecration of Hadrian — when he became master of the world after years of worrying and waiting. Hadrian was declared Emperor by the Legions when Trajan died suddenly while campaigning in Parthia on August 8th, 117 ... and nearly a year later, on July 9th, 118 AD, he formally became Emperor of Rome.

In this illustration, you see Hadrian entering the Roman Forum at the height of his power. Standing behind him in the chariot is Antinous saying: "Respice post te! Hominem te esse memento! Memento mori!": "Look behind you! Remember that you are a man! Remember that you'll die!"

On this day in 117 AD, however, Hadrian truly had been in fear of death. Hadrian had been on tenterhooks for years wondering whether Trajan would formally adopt him as his heir.

If Trajan died without the issue of succession being settled, it could result in civil war — or at least in the assassination of Hadrian by some other ambitious man.

It is said that the Divine Empress Plotina forged the will of her husband and gave the throne to Hadrian, who had been her protégé and friend for years.

After assuming power, Hadrian first settled the conflict with the Persian King, signing a peace treaty that was to last through the whole of his reign. As Trajan's military representative in the provinces, he had seen how the empire was beginning to over-reach its resources. So he set about consolidating things in the East, lest his Empire become embroiled in the sort of chronic blood-letting that modern superpowers now seek to extricate themselves from in that same region.

It is also said that he wanted to let the political dust settle back in Rome before returning to a city where his critics were waiting. Many thought him unfit. Hadrian was Hispanic — literally so. He was born in the province of Hispania and spoke Latin with a provincial "Hispanic accent" which was the cause of much derision by high-born Patricians when he was sent to Rome as a boy to be educated. He never liked Rome and, throughout his reign, spent as little time there as possible.

Settling other matters in the East, Hadrian waited a full year before  returning to Rome, and on July 9th, 118, he entered the Holy City and was formally and ritually installed as Emperor by the Senate. He was then consecrated as Pontifex Maximus, highest priest of the Roman Religion, and head of all foreign cults.

He inherited from the warrior-king Trajan the largest empire that the western world had ever known — Rome at her greatest size and strength — and he wisely chose not to continue to expand the frontiers, but to turn instead to the development of the interior.


He visited every province, traveling more than any other emperor before or after, dedicating his power to art, literature, legal reform and the promotion of peace, prosperity, and the united religious consciousness of Roman citizenship after his beloved Athenian model.

Flamen Antinoalis Antonius Subia says the following about this Sacred Day in our Liturgical Calendar:

"On this day, Imperator Caesar Traianus Hadrianus Augustus was to assume responsibility as the spiritual leader of the Empire, Father of the Country with a vigor unparalleled by his predecessors, and was to be one of the foremost builders of cities, temples, and public structures world-wide. For his love of Antinous and the extraordinary gesture of deifying our god, we worship and venerate Hadrian as the founder of our faith and as our immortal father, the lover of Antinous."