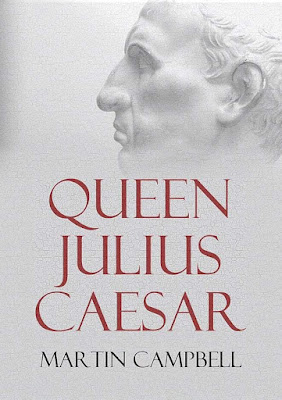 LOOKING for a holiday book tip? We can most assuredly say that, if you loved THE LOVE GOD, Martin Campbell's historical novel about the life of Antinous ... now you must read his new novel about the early life of Julius Caesar entitled "Queen Julius Caesar" ... now available in Kindle and paperback. ORDER HERE!

But far more interestingly, Campbell shows how a cocky, privileged young Patrician, accustomed to getting his way, is forced through adversity and deprivation ... and the intervention of Eastern potentates ... to develop the qualities of character that will make him a great leader.

Along the way, he parlays physical and emotional disabilities (epilepsy, obsessive-compulsive tendencies and self-injury to allay emotional pain) into strengths which will enable him to outwit and outmaneuver his adversaries.

His lessons begin at sea on a galley loaded with gold when pirates commandeer his vessel and hold him for ransom. Cunningly, he informs his captors the ransom is too low, and he finagles and entraps the pirates.

Another man in such a hopeless and helpless situation would give up. But Campbell skillfully shows how Caesar used his wits and his obsessive-compulsive discipline and determination not only to save himself and his adjutants, but also to emerge victorious and to exact cruel vengeance which would earn Caesar a place in the history books as a man not to be trifled with.

In addition, in Campbell's brilliant historical novel, 20-year-old Caesar's education in leadership comes in the arms (literally) of Nicomedes IV, king of Bithynia, and his consort Nysa.

Campbell shows how young Julius Caesar observed the way Nicomedes charmed and coaxed and coerced his courtiers and his naval and land forces into doing his will ... without having to resort to blunt force in the traditional Roman way.

By the end of this at once charming and illuminating book, the reader has accompanied Julius Caesar from bumptious adolescence to manhood as a mature leader who can meet ... and defeat ... anything or anybody who gets in his way.

Through it all, the goddess Minerva provides off-stage asides to the reader in the tradition of the chorus in a Classical stage comedy.

Campbell is working on two more novels ... and we can't wait!