ALEXANDRIA ALIGNED TO SUN
ON ALEXANDER THE GREAT'S BIRTHDAY 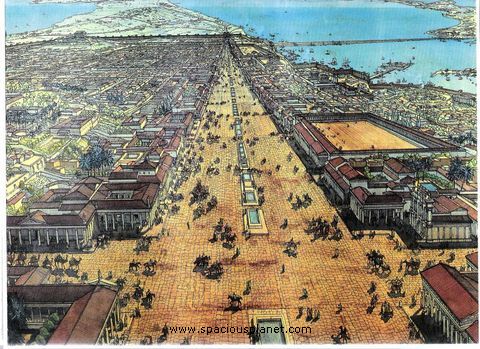 ALEXANDRIA, home to one of the seven wonders of the ancient world, may have been built to align with the rising sun on the day of Alexander the Great's birth.

The Macedonian king, who commanded an empire that stretched from Greece to Egypt to the Indus River in what is now India, founded the city of Alexandria in 331 B.C.

It would later become hugely prosperous, home to Cleopatra, the magnificent Royal Library of Alexandria and the 450-foot-tall (140  meters) Lighthouse of Alexandria, one of the SEVEN WONDERS OF THE ANCIENT WORLD.

Hadrian and Antinous visited Alexandria in the summer and early autumn of 130 AD.

Ancient Alexandria was planned around a main east-west thoroughfare called the Canopic Road, points out Giulio Magli, an archaeo-astronomer at the Politecnico of Milan.

A study of the ancient route reveals it is not laid out according to topography; for example, it doesn't run quite parallel to the coastline.

But on July 20th, the birthday of Alexander the Great, the rising sun of the 4th Century BC rose "in almost perfect alignment with the road," Magli was quoted as saying.

July 20th, 356 BC, is the date which has always been accepted as the birthday of Alexander the Great. Whether it was his actual birthday or only the official royal observance of his birth is unknown.

It is said that on the night before the mother of Alexander, Olympias, was to be married to King Phillip of Macedonia, she dreamt that a thunderbolt struck her body and filled it with power.

After the marriage, it is said that Phillip peeked into her chamber, and found her lying with a serpent, and that he afterward dreamt that her womb was sealed and that a lion dwelled within her.

He was considered to be the son of Zeus, and this divine origin was what was given as an explanation for the unprecedented conquests that he accomplished. In his youth Aristotle, a student of Plato, educated him along with his following of young princes, who were later serve as his generals, and the founders of great dynastic monarchies of the Hellenistic world.

In one of their first battles, while Phillip was still king, the young Alexander proved himself by defeating the SACRED BAND OF THEBES, the army of homosexual lovers who were the most famous and courageous warriors of their time.

He would later go one to conquer the entire Eastern world, Asia Minor, Syria, Judea, Egypt, and all of Persia, as far East as India.

The Empire of Alexander spread Greek culture throughout the world, and made the communication of far-distant ideas possible so that the new Hellenistic culture that he created, was a combination of classical Greece and of the exotic cultures that were imported from every corner.