THE MYSTERY TORSO OF THE MET
COULD THIS BE ANTINOUS? 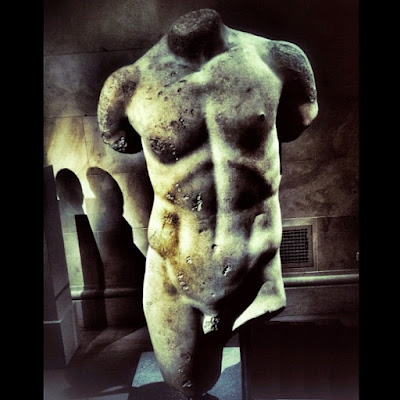 MORE statues of Antinous were made than any other mortal in Ancient Rome, even more than of Augustus Caesar ... and countless bits and pieces indicate that there were even more Antinous statues.

This torso at New York's Metropolitan Museum of Art has intrigued art historians for years ... could it be Antinous?

To the unskilled eye, it looks like any other torso of a young man in exceedingly good physical condition. But to the trained eye of an Antinoologist ... there are several salient features which practically scream out: "I am a statue of Antinous!"

First of all, experts generally agree that this is a Roman copy of a Greek-style statue ... the type of statue which the Greeks would have sculpted in the 5th Century BC ... and which Emperor Hadrian admired so greatly and brought in Greek sculptors to replicate in the 2nd Century AD.

The Greeks would have called it an "ephebe" or innocent youth. And yet, there is a certain glamorous attitude about this statue which shouts out "Roman." 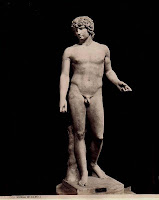 The neck is inclined, indicating that the head originally was tilted forward in a reflective and melancholy pose very typical of Antinous.

And the torso itself looks almost identical to the Antinous Farnese statue in Naples (right). The Farnese has a languid, dreamy-decadent melancholy about it, owing to the sad face and inclined head.

But the decadent melancholy of a "waking  dreamer"  persists even in  the body alone, as  demonstrated by the  New York  torso ... the Mystery Torso of the Met ....