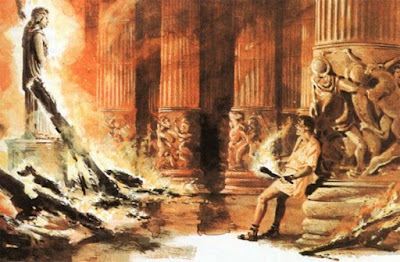 Herostratus was a 4th Century BC Greek arsonist who sought notoriety by destroying one of the Seven Wonders of the Ancient World, prompting a law forbidding anyone to mention his name.
His name has become a metonym for someone who commits a criminal act in order to become famous.
On 21 July 356 BC, seeking notoriety, he burned down the Temple of Artemis at Ephesus in Asia Minor (now Turkey). 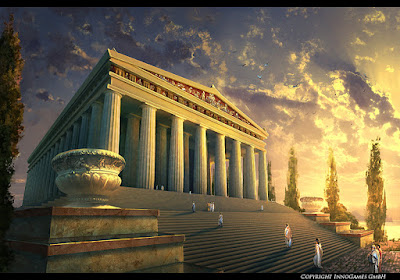 The temple honoured a local goddess, called Artemis by the Greeks, their version of Diana goddess of the hunt, the wild, and childbirth.
The temple was constructed of marble and was built by King Croesus of Lydia to replace an older site destroyed during a flood. Measuring 130 meters long (425 feet) and supported by columns 18 meters high (60 feet), it was one of the Seven Wonders of the Ancient World.
Far from attempting to evade responsibility for his act of arson, Herostratus proudly claimed credit in an attempt to immortalise his name.
To dissuade those of a similar mind, the Ephesian authorities not only executed him, but attempted to condemn him to a legacy of obscurity by forbidding mention of his name under penalty of death. However, this did not stop Herostratus from achieving his goal because the ancient historian Theopompus recorded the event and its perpetrator in his Hellenics.

Herostratus' name lived on in classical literature and has passed into modern languages as a term for someone who commits a criminal act in order to bask in the resultant notoriety.
Posted by Hernestus at 12:01 AM