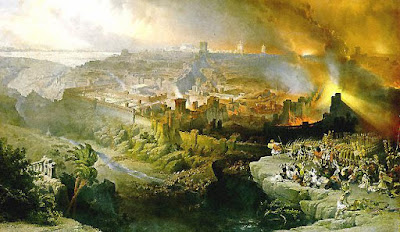 IT is indeed ironic that Jerusalem is in the headlines again, amidst continuing religious and political strife and bloodshed, for it is in mid-July when the Religion of Antinous commemorates the bitter-sweet arrival of Antinous and Hadrian in Jerusalem in the year 130 AD.

In hindsight, Hadrian must have viewed Jerusalem as a bad omen enroute to what would tragically turn out be a fateful date with destiny in Egypt following a triumphal tour of Asia Minor. This day in the year 130 AD signaled a turning point in history. 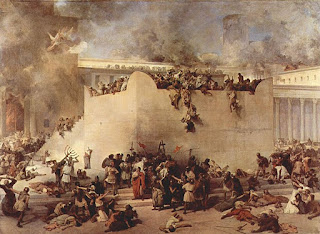 In a few years, he would raze the city to the ground in rage at the Jewish rebellion, earning him the enmity of Jews forever more. In a few weeks, the entourage would enter drought-stricken Egypt, where Hadrian would be confronted by despair and discontent.

And only six months hence, his beloved Antinous would be dead. The wise and cautious emperor would turn bitter and cruel without sweet Antinous at his side. The history of Western Civilization was about to change ....

But on this day in the spring of 130 AD, Hadrian basked in the golden glow of adulation, sensing perhaps only vaguely that this glow was in fact the sunset of his reign.

Hadrian and Antinous crossed the Jordan river and entered Jerusalem on this day in 130. There they remained for much of summer of 130, while Hadrian immersed himself in the Jewish faith and attempted to convince Jewish leaders to compromise on religious matters. He soon realized that compromise was impossible.

Hadrian had two facets to his personality. One was the compassionate and wise seeker of knowledge who was open to new ideas, particularly when they pertained to spiritual matters. But the other facet was the uncompromising warrior who could not allow an affront to Roman dignity and socio-economic order to go unpunished. 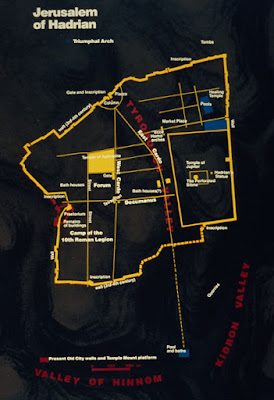 It was during this visit to Jerusalem that Hadrian realized the Jews would never be subsumed into Roman society. He began issuing controversial decrees, such as outlawing circumcision.

It may have been during this visit that Hadrian began drawing up plans to rebuild Jerusalem after the fashion of the Greeks, with major temples to Jupiter and Venus.

He may even have begun work on the reconstruction of the Temple Mount, dedicating the new Temple to Jupiter Capitolinus, with a statue of Hadrian in front.

His actions and disregard for the Jewish religion led to the rebellion of Bar Kochba, and the protracted and very bloody Jewish war. The result of this war was that Jerusalem was renamed Aelia Capitolina, and all Jewish and Christian Churches were replaced with Temples to Venus and Adonis.

Israel was renamed Palestine, and the Jews were forbidden to enter Jerusalem except once a year on Passover.

This is where the glorious tour of the Eastern Provinces turned sour. But it is also where the glorious reign of Hadrian turned sour. Until the year 130, Hadrian had surprised his critics with his even-handedness and his cautious wisdom and his patience in seeking peace and avoiding armed conflict wherever possible. His goal was to create a Hellenistic society based on tolerance and mutual benefit.

But the second half of the year 130 changed everything. By the end of the year Antinous would be dead and Hadrian would return to Rome a broken and embittered man. The man who loved to travel and spent half of his reign abroad would never leave the environs of Rome and his villa at Tivoli again. The remaining eight years of his life would be marked by capricious cruelty, vindictiveness, chronic pain and sickness. Above all, he would be remembered for a devastating war against the Jews — a war which left a sore which continues to fester 1,800 years later.