FRENCH EGYPTOLOGIST ALBERT GAYET
IS A SAINT OF ANTINOUS 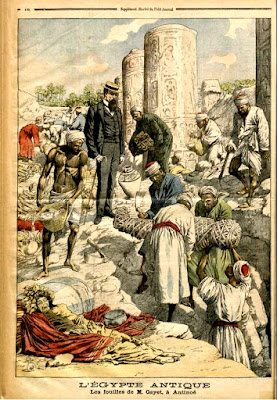 WE are proud to consecrate French archaeologist Albert Gayet as a Messenger Saint of Antinous for his pioneering efforts to reclaim the city of Antinoopolis from the sands of oblivion.

The city that Hadrian built and dedicated to his lover Antinous flourished for hundreds of years before being looted and plundered and lost to the desert sands of Egypt.

Napoleon's French team of proto-archaeologists mapped and catalogued the remains at the turn of the 19th Century.

But it was this rather curious and eccentric French bachelor who would make the lost city ... Antinoopolis ... famous again.

Antinoopolis became renowned around the world in 1895 when Gayet began exploring the vast necropolis burial grounds south of Antinoopolis.

An estimated 40,000 mummies were buried in the Antinoé necropolis.

Between 1895 and 1911, Gayet worked tirelessly at Antinoé, the French name for the city which became synonymous with his own name.

He stood out against the squalor of the wretched modern village and the moonscape of ancient ruins ... dressed impeccably in a three-piece black linen suit and tie, with a boater hat, a cane and white gloves ... more befitting a stroll on the Champs Élysée in Paris than overseeing Egyptian workers toiling in the blistering Egyptian sun as they unearthed mummies from the sands.

To his utter astonishment, many of the mummies were gilded, many were swathed in priceless woolen wraps and others wore Byzantine jewellery and headdresses.

He returned to Paris, where the most exquisite mummies were put on display at the Louvre, attracting throngs of visitors and spawning a "Coptic Craze" throughout Europe and America.

Antinoopolis embroidery and linens inspired Matisse, Renoir and the leading Paris fashion designers, who incorporated the rich colors and designs into their work.

But the craze soon waned. The mummies were packed away in storage, most of them to disintegrate or become lost.

Gayet died in Paris at age 60, impoverished and embittered after having spent 20 years of his life trying to raise funds for further exploration of Antinoopolis.

Unmarried, he bequeathed a number of Antinoopolis artefacts which he had kept for himself to his sister in Dijon, where the artefacts are in the local museum and a street is named after him.

Gayet's dream of a "Musee d'Antinoé" in Paris died with him.