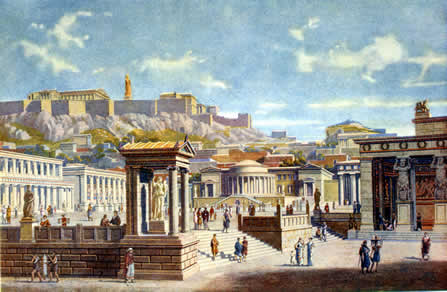 Antinous and Hadrian stayed in Athens from September 128, through February 129.
Their time was spent among philosophers and artists.
Athens was Hadrian's favorite city in the Empire, and the time spent here with Antinous was perhaps the high point of their lives together.
Flamen ANTONIUS SUBIA says:
"We revere this special time as the occasion in which the virtues of the Academy of Plato, and pleasures of the Garden of Epicurus took their place in the heart of Antinous.
"It was here also that Antinous attended sacred theater of Dionysus.
"We venerate Athena, the goddess of wisdom, as the guardian and guide of Hadrian, and as the Sophia of learning, the Lady of Philosophers."
Posted by Hernestus at 2:56 PM