THE BIRTH OF ANTONINUS PIUS 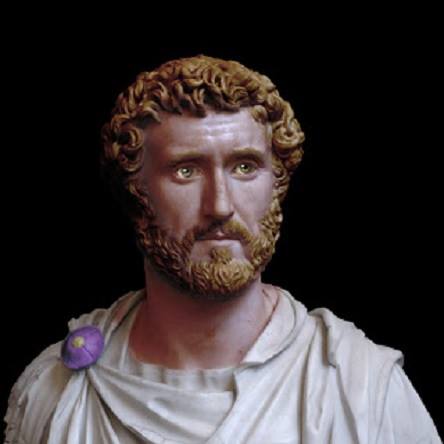 SEPTEMBER 19 the Religion of Antinous celebrates the birth of the Divine Emperor Antoninus Pius.

Under the Divine Hadrian he served as Proconsul of Asia minor from 130 to 135, the most crucial years in the development of the Religion of Antinous. After that he was summoned to Rome to be close to Hadrian as his health failed.

With the untimely death of the emperor's chosen heir, the blessed Lucius Aelius Verus Caesar, Hadrian chose Antoninus to be his successor. Thus Hadrian adopted him as his son and successor on the 25th of February 138, on condition that he himself adopted Hadrian's great nephew-by-marriage Marcus Aurelius, and Lucius Aelius Verus's son Lucius Verus, who was only 7 years old.

Hadrian's choice in successors proved to be infinitely wise.

Following decades of political turmoil, civil strife and imperial excesses, Hadrian and his successors ushered one final period of peace and prosperity for Rome which would go done in history as the Sacred and Golden Age of the Antonines.

On Hadrian's death, Antoninus Pius was enthusiastically welcomed to the throne by the Roman people, whose hopes of a happy reign were not disappointed. For Antoninus came to his new office with simple tastes, kindly disposition, extensive experience, a well-trained intelligence and the sincerest desire for the welfare of his subjects.

One of his first acts was to persuade the Senate to grant divine honors to Hadrian, which they had at first refused (but later agreed to). This gained him the title of Pius (dutiful in affection). He built temples, theaters, and mausoleums, promoted the arts and sciences, and bestowed honors and salaries upon the teachers of rhetoric and philosophy.

Unlike his predecessors Trajan and Hadrian, Antoninus Pius was not a military man. His reign was comparatively peaceful. Insurrections amongst the Moors, Jews, and Brigantes in Britain were easily put down. The one military result which is of interest to us now is the building in Britain of the Wall of Antoninus (a few miles north of Hadrian's Wall), which was proclaimed in 2008 to be a UNESCO World Heritage Site.

During his reign, Antoninus issued coins celebrating the religious glory of Rome in celebration of the nine hundredth anniversary of the city in 147. The coins asserted the superiority of Romanism over the Empire.

Antoninus is said to have restored the sanctity of the ancient Roman faith, and to have reinvigorated its ceremonies, which is another possible reason why he was surnamed Pius.

The Religion of Antinous was in its infancy when Antoninus Pius came to power. The Blessed Boy's temples were under construction. The Sacred City of Antinoopolis was unfinished. It would have been easy for Antoninus Pius to pull the plug on the expense involved in the new religion. After all, Antoninus Pius was known as a penny-pincher who demanded fiscal restraint.

Instead, Antoninus Pius generously supplied the fledgling religion with imperial largess and was instrumental in the spread of the Faith of Antinous in those early years. Without him, the religion would have vanished at Hadrian's death. Instead, it flourished for centuries.

After the longest reign since Augustus (surpassing Tiberius by a couple of months), Antoninus died of fever on March 7, 161. His last public utterance was when the tribune of the night-watch came to ask the password — "aequanimit as" (equanimity). It was a fitting epitaph.

His body was placed in Hadrian's Mausoleam, a column was dedicated to him on Mars Field, and the temple he had built in the Forum in 141 to his deified wife Faustina was rededicated to the deified Faustina and the deified Antoninus. The Temple of Antoninus and Faustina still stands today in the Roman Forum (at right, now called the Church of San Lorenzo in Miranda).

We pay tribute to Antoninus Pius, who truly lived up to his title as a man of wisdom and piety.