FEATURED ANTINOUS STATUE OF THE DAY
THE ANTINOUS OF ELEUSIS 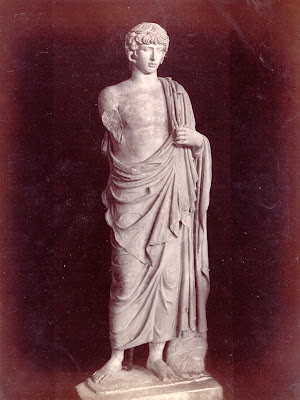 THIS statue of Antinous from Eleusis - Ἐλευσίς - is the only one that seems to refer back to an incident in his life, his initiation into the Eleusinian Mysteries of death and resurrection in September 128 AD.

The sculpture was erected after his death in the outer courtyard of Eleusis and captures this instant of his life, though officially it depicts him as the god Dionysos Zagreus, a divinity of suffering abd resurrection associated with the Eleusinian Mysteries.

Technically it is not one of the best of the depictions of Antinous, but it evokes a mood and a moment. 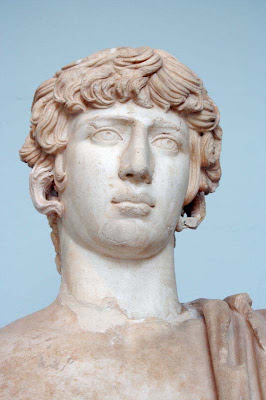 The sulptor clearly envisaged the young lad draped in his himation, standing in the darkened Telesterion (the initiation hall) and confronted with the Eleusinian Mysteries of death and resurrection.

He clutches at the folds of his himation anxiously, insecure, staring wide-eyed, his mouth pursed in awe, with an expression of apprehension, intent rapture and awareness of the tremendous significance of what was being revealed to him.

Even though it is a mediocre statue in workmanship and details it is redeemed by its expressiveness and pathos.

This statue is now housed in the Archaeological Museum of Eleusis: Antinous as Dionysus Zagreus, Inv. 5092, 1.83 m, in marble of Thasos.