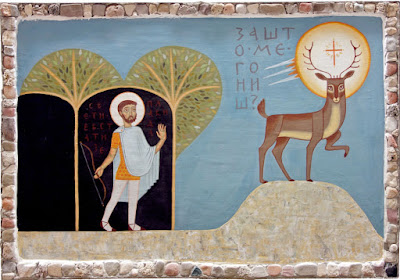 SEPTEMBER 20th is the saint day of Saint Eustace, patron saint of hunters, firefighters and also anyone facing adversity, a Christian saint who is linked by legend to Emperor Hadrian.

Saint Eustace, also known as Eustachius or Eustathius in Latin, purportedly was a general named Placidus, who converted to Christianity and who ... again, according to legend ... was persecuted by Hadrian. 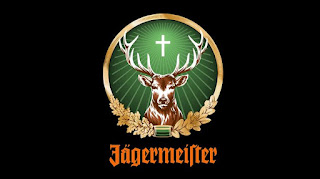 While hunting a stag in Tivoli near Hadrian's Villa, Placidus saw a vision of a crucifix lodged between the stag's antlers.

He was immediately converted, had himself and his family baptized, and changed his name to Eustace (Greek: Εὐστάθιος Eustathios "well standing, stable, steadfast").

A series of calamities followed to test his faith: his wealth was stolen; his servants died of a plague; when the family took a sea-voyage, the ship's captain kidnapped Eustace's wife Theopista.

And as Eustace crossed a river with his two sons Agapius and Theopistus, the children were taken away by a wolf and a lion. Like Job, Eustace lamented but did not lose his faith.

He was then quickly restored to his former prestige and reunited with his family. 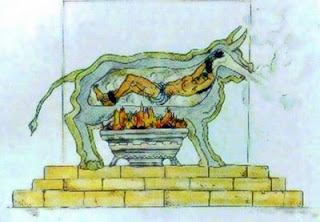 There is a tradition that when he demonstrated his new faith by refusing to make a pagan sacrifice, Emperor Hadrian condemned Eustace, his wife, and his sons to be roasted to death inside a Brazen Bull ... a bronze statue of a bull or an ox ... in the year AD 118.

However, the Catholic Church rejects this story as "completely false".

Eustace became known as a patron saint of hunters and firefighters, and also of anyone facing adversity; he was traditionally included among the Fourteen Holy Helpers. He is one of the patron saints of Madrid, Spain. The island of Sint Eustatius in the Caribbean Netherlands is named after him.

The German digestif schnapps Jägermeister (German for "Master of the Hunt") has a round logo of a shining cross between the antlers of a deer/stag referring to two persons who had seen such a vision: Saint Hubertus and Saint Eustace.