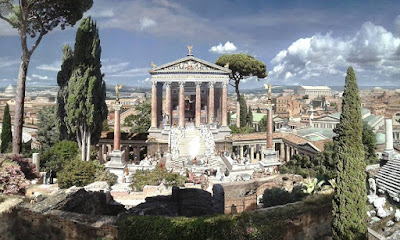 As Jupiter Optimus Maximus, he occupied the temple of Jupiter Capitolinus on the Capitoline hill with the goddesses Juno and Minerva. With them, he received a Lectisternium (September 13) and the Ludi Romani  (September 5-19).
Posted by Hernestus at 12:00 AM