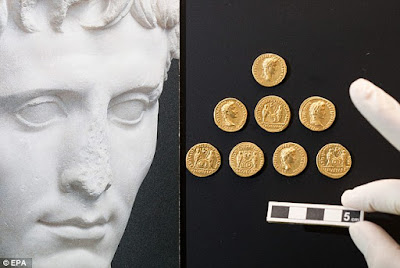 WHERE was the Battle of Teutoburg Forest fought in the year 9 AD? That is a trick question which school teachers have loved to spring on their pupils for generations.
The answer, of course, is that the Battle of Teutoburg Forest was fought at Teutoburg Forest, changing the course of Western Civilization. But where is that?
Now, for the first time, archaeologists say they have found eight gold coins which confirm the location was at a place called Kalkriese Hill … which is a short distance from the modern-day Teutoburg Forest.
Such a find is extremely rare, the researchers say, and this recent discovery at Kalkriese Hill expands the number of gold coins collected at the site by more than double the previous amount. 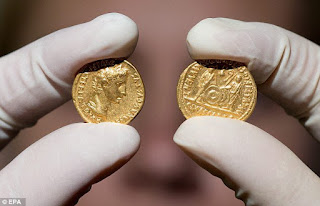 The coins featured images of the Emperor Augustus, with the imperial princes Gaius and Lucius Caesar on the back, and all date back to a period before the ancient battle. Thus they were carried by the legions into the battle.

The defeat of the crack troops, who were led to their deaths by ex-Consul Publius Quinctilius Varus, effectively changed the course of Western Civilization.

Prior to 9 AD, Emperor Augustus Caesar pursued a course of military expansion across the Rhine and into central and northern Europe. After 9 AD, the Rhine became the frontier between the "civilized" Roman world and the "barbaric" lands to the east and north.

Prior to becoming emperor, Hadrian himself had served a stint of duty along the Rhine. As emperor, he consolidated the borders of the empire and his forces never ventured across the Rhine into across-the-Rhine Germania.

Historians have always referred to the Battle of Teutoburg Forest as a defining moment which affected the course of history.

It has even been cited as a factor in both world wars, especially by the French and British, who considered themselves to have a Roman heritage, as opposed to the Germans, whom war propagandists condemned as the descendants of barbarians.

As a result, Germany was never incorporated into the Roman Empire, leaving that region a breeding ground for barbarian incursions which eventually would bring down the empire and eventually (according to Allied war-time propaganda) result in two world wars.

Arminius, known as Herrmann to the Germans, has indeed come down through German history as a heroic symbol of liberty and German national strength. Herrmann turned back the Roman occupation forces forever, according to the popular interpretation by German nationalists.

In the late 19th and early 20th Century, unscrupulous German leaders used Hermann as a rallying figure in wars of aggression.

A monument near the site of the Teutoburg Forest battlefield celebrates Herrmann as a national hero. Thousands of German tourists visit the site annually. And the regional soccer team (in Bielefeld) is called Bielefeld Arminia. "Armin" is a popular name for German boys to this day.

Archaeologists in recent years have determined the exact location of the battle near the modern village of Engter north of the city of Osnabrueck. Bones, weapons and armour from the fleeing soldiers of the XVII, XVIII and XIX Legions are strewn along a narrow 17-km-long stretch of marshy woodlands bounded by confining hills to the north and south.

Arminius had been educated in Rome and had become a trusted friend of Varus. The idea was that raising future chieftains in Rome would bond them to Rome when they returned to their families on the frontier.

Arminius was an example of how that policy could backfire and result in knowledge of Roman ways being used against the Romans. Arminius ingratiated himself with Varus, who was one of the most influential men in Rome, a friend of Augustus Caesar himself.

It was that trust in Arminius which resulted in Varus leading a punitive expedition into an indefensible, boggy forest without sentries or reinforcements ... on advice of his trusted friend Arminius.

In the resulting massacre, Roman soldiers fled for their lives. Most were cut down in the mud. Blue markings in the graphic show where Roman bodies and armament have been found.

Those who survived were sold into slavery or else were placed in wicker cages and burned alive as sacrifices to the Germanic deities.

Reports of the battle are sketchy for the simple reason that almost no one survived to report what had happened.

Never before had three entire legions been wiped out in a single battle. The defeat was so devastating that the numbers of the Legions XVII, XVIII and XIX were retired forever, never again to appear in the Roman Army's order of battle.

Augustus was so traumatized by the loss of three elite legions that he went into a prolonged state of mourning as though for a beloved son ... he tore his clothes, refused to cut his hair for months and, for years afterwards, was heard to moan from time to time, "Quintilie Vare, legiones redde!" ("Quinctilius Varus, give me back my Legions!").

This scene from the epic BBC/PBS mini-series I, Claudius dramatically recreates how Augustus received the news: