SHIPS HAVE BEEN NAMED
FOR THE STAR OF ANTINOUS 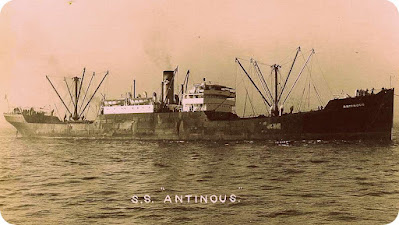 ON September 24, 1942, the S.S. Antinous was torpedoed by a German U-Boat Submarine in the Caribbean, ending a two-decade career as a merchant marine cargo steamer.
But this ship was only one of many vessels which have been named for the Star of Antinous over the centuries.
In the days before GPS, when the sun set at night, sailors used the stars to navigate. Stars move across the sky from east to west, and some stars, called rise and set stars, begin and end their nightly path below the horizon.
Sailors determined their heading by watching the movement of the stars the same way they watched the sun's movement. There is an ancient maritime tradition of naming ships after stars in the hope that the stars will bring the sailors safely to their destination.
Thus, ships were called Sirius, Aldebaran, Polaris, Arcturus ... and Antinous.
The Star of Antinous holds a key fixed-star position near Altair on the Milky Way. Thus Antinous is a good name for a ship, regardless whether the crew or owners had any idea who the historical Antinous might be.
Many ships have been named for the Star of Antinous. Built in 1919-20, the American registry vessel was chiefly employed on the Gulf of Mexico to Europe routes throughout her career. On 24 September 1942, while on a passage to British Guiana to load her cargo, she was torpedoed and sunk by German submarine U-512 sank operating at the time in the Caribbean.
Captain Hamilton Powell and his crew of eight officers, 27 men and 16 armed guards abandoned ship in three lifeboats and were rescued.
Posted by Hernestus at 10:35 PM