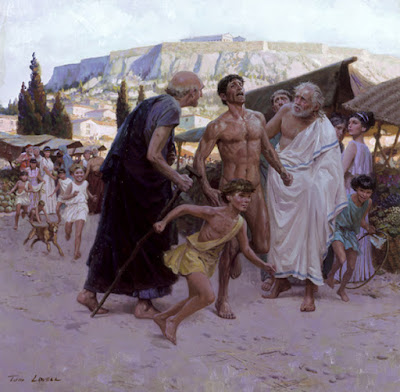 ON September 12, 490 BC, 10,000 Greeks use superior tactics to push 100,000 Persians back into the sea at the Battle of Marathon Bay ... forever changing the course of Western Civilization.
Though outnumbered 10 to 1, the Greeks won thanks to their new tactics. 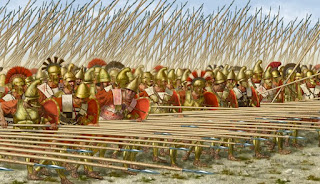 Instead of individual soldiers fighting one-to-one duels, the Greeks rolled out their "phalanx" battle line of Hoplite soldiers who fought as one impenetrable unit.
The Battle of Marathon was a watershed in the Greco-Persian wars, showing the Greeks that the Persians could be beaten; the eventual Greek triumph in these wars can be seen to begin at Marathon.
The battle also showed the Greeks that they were able to win battles without the Spartans, as they had heavily relied on Sparta previously. 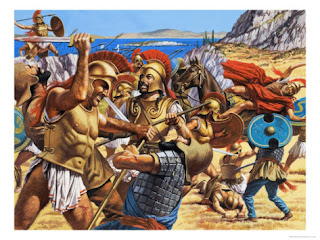 This win was largely due to the Athenians, and Marathon raised Greek esteem of them. Since the following two hundred years saw the rise of the Classical Greek civilization, which has been enduringly influential in western society, the Battle of Marathon is a pivotal moment in history.
The battle is perhaps now more famous as the inspiration for the marathon race.
Although thought to be historically inaccurate, the legend of the Greek messenger Pheidippides running to Athens with news of the victory became the inspiration for this athletic event, introduced at the 1896 Athens Olympics, and originally run between Marathon and Athens. 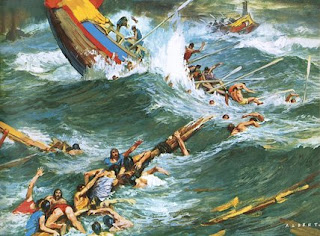 Pheidippides was a professional "hemerodrome" (foot courier) who was sent to Sparta to request help when the Persians landed at Marathon, Greece.
He ran 240 km (150 mi) in two days. Thanks to him, the Persians were defeated.
He then ran the 40 km (26 mi) from the battlefield near Marathon to Athens to announce the Greek victory over Persia in the Battle of Marathon (490 BC) with the words "Chairete, nikomen!" ("Rejoice, we are victorious!") ... before collapsing and dying ... uttering "Cairete" (Rejoice) with his final rasping gasp of breath.
Image at top of entry: "Man Runs First Marathon To Bring News of Greek Victory Over Persia" painting by Tom Lovell (1909–97)
Posted by Hernestus at 12:00 AM