THE DAY ANTINOUS WAS INITIATED
INTO THE ELEUSINIAN MYSTERIES 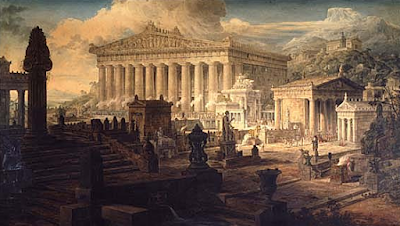 ON THE EQUINOX in September the Religion of Antinous commemorates the FEAST OF THE PERSEPHONEA — the initiation of Antinous into the ELEUSINIAN MYSTERIES in Greece at the outset of Emperor Hadrian's Imperial Tour of the Eastern Provinces.

Historical records state that, in the late summer of the year 128, the Imperial Court embarked on a grand tour of the East. The Empress Sabina, Hadrian's wife, and her attendants were members of the entourage.

But on this particular journey, Antinous was the most favored of Hadrian's companions. Their love affair was openly, and gracefully displayed before the eyes of the world. This journey through the East, what we call the SACRED PEREGRINATION, is the only part of the short life of Antinous that history has conveyed to us.

For this reason it takes on the importance of a sacred epic. Antinous  was in the very flower of his beauty and vigor, he was a shining star  held in the wings of the Imperial Eagle, and it is no coincidence that  this court of demigods should travel through the lands of Ganymede, Attis, Adonis, Jesus and Osiris, who were all beautiful souls taken from life before their time.

The court stayed in Athens for five or even six months, they arrived in time for the celebration of the MYSTERIES OF ELEUSIS, which symbolically portrayed the rape of Proserpina by Hades, the mourning of her mother Demeter, and the return of Spring.

In the modern Religion of Antinous, we commemorate these ELEUSINIAN MYSTERIES during the September Equinox, for it is believed that Antinous underwent the secret initiations provided by the Priests of Eleusis at the Temple of Demeter/Ceres.

The painting above by Joseph Gandy in 1818 shows how the temple may have looked in the 2nd Century AD. The painting at right is "The Garden of Persephone" by Robert Hale Ives Gammell.

Through the Priests of Eleusis Antinous received the consecration of the dark goddess of the underworld Persephone/Proserpina, which prepared him for his own death and resurrection.

In the Mysteries of Eleusis, the initiates are led into the realm of death and are confronted with immediate death.

Two years later, in 130 AD, Hadrian and Antinous would indeed be confronted by physical death.

In the Mysteries of Eleusis (and indeed in the Underworld after Death), the initiates cannot go back the way they have come.

And they cannot go forward without knowing the Words of Power that will allow the gatekeepers to throw open their gates.

But we face such situations not only in secret initiations, or on our deathbeds. No, we face such "mysteries" every day of our lives. 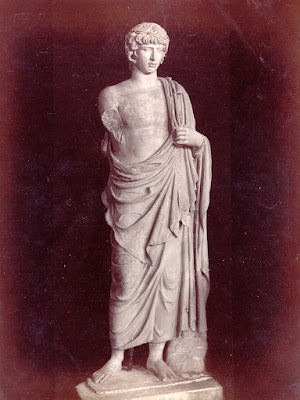 We put off our dreams and aspirations so we can cope more effectively with the challenges of the present, ostensibly to have more time and leisure to realize our purpose in the future.

Or we tell ourselves that we will chase our dreams someday once we have accomplished other lesser goals.

In truth, it is our fear that keeps us from seeking fulfillment in the here and now — because we view failure as a possibility, our reasons for delaying our inevitable success seem sound and rational.

If we ask ourselves what we are really waiting for, however, we discover that there is no truly compelling reason why we should put off the pursuit of the dreams that sustain us.

That is what "mystery initiations" are all about. Hadrian and Antinous were forced by the Eleusinian priests to confront their fears and to find a way to go forth into life — NOW. They had no options. It was now or never. Life or Oblivion. In our own lives, we face the same question every day. And usually we try to find a way to avoid the question.

The idols, the images, the icons, the gilded statues and the gods themselves are as nothing.

YOU YOURSELF HOLD THE KEYS TO FINDING AND FULFILLING YOUR OWN DESTINY.

It is yours to find and to fulfill. No one else's. Not even the gods'.

Even if the days are getting shorter, they are also getting longer — it is all a matter of perspective. The days ARE getting longer — our brothers in South America, South Africa and Australia can look out the window and see the lavender blossoms of the jacarandas in springtime bloom.

Remember Hadrian and Antinous in the Underworld (or on their Fateful Voyage Up the Nile) and understand what they understood: That the keys of fate are in your hands and you can venture forth RIGHT NOW wherever you wish to go.

FOR IT IS WRITTEN ON THE OBELISK OF ANTINOUS:

He is able to enter any place he wishes.
The Guardians of the Gates
Of the Underworld
Say "Praise to You!" to Him...
They loosen their bolts
And throw open their Gates before Him ...
Millions of years ... daily ...
As His duration of life is as the sun,
Never in eternity elapsing!"