IN PRAISE OF MERCURY 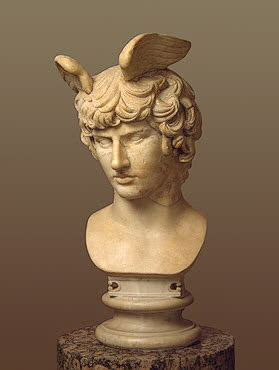 WE lift up our hearts to the great wing-footed God Mercury on this day in mid-May when Mercury traditionally leaves stodgy Taurus and wings his way into Gemini, his astrological home.

The Ancient Romans celebrated this cosmic event on May 15th each year with the Mercuralia festival.

Father of Antinous, son of Zeus and Maia, Mercury is the god of speed, the Lord of commerce, communication, and cunning.

He is forever young and beautiful, the patron of skilled athletes, especially runners, and yet he possesses the infinite wisdom of extreme old age.

When Mercury was one day old, he charmed Apollo by stealing the sun god's prized cattle and crafting an ingenious story to cover his tracks.

Apollo fell in love with Mercury and from that day forward became his godfather and protector, presenting him to Olympus. Zeus was so taken by his son Mercury that he made him the messenger of the gods, and placed in his hand the sacred Caduceus, the serpent-entwined rod.

Hermes (as he was called by the Greeks) was charged with escorting the souls of the dead to the underworld, and to relay messages between heaven and hell. Thus he acquired his mystic powers, which were the inspiration of the Hermits, and of their religion known as Hermeticism.

He was known to them as Hermes Tristmegistus, the "thrice-great", and was said to have taught the secret knowledge of salvation to mankind.

As Hermes of the crossroads, he was a Phallic god, whose image was a herme, or column with a bearded head and a large penis that was placed at forks in the road to protect travelers.

Mercury made love to Venus and was father of Pan, Priapus, Hermaphroditus, and of Fortuna. He was the craftiest inventor, who created the lyre, which he gave to Apollo. And he invented written language, weights and measurement.

Mercury was the god of good business, but also of dishonesty and absolute capitalism. He invented dice and was the lord of gambling and all games of chance.

Antinous was often compared to Mercury in the statues and in the artefact fragments (bust above). His powers of youth, virility and physical fitness were central parts of the Religion of Antinous. But the hermetic sages, from whom so much of the salvation of Antinous extends, deepened this fascade. He is, along with Dionysus, Apollo and Osiris, a major facet of the Spirituality of Antinous.

We acknowledge and extol Mercury, the wing-footed god, and pray to him as Antinous to run by our side and give us good fortune throughout our travels and in our communication with the divine.