THE BIRTH OF PLATO
SAINT OF ANTINOUS 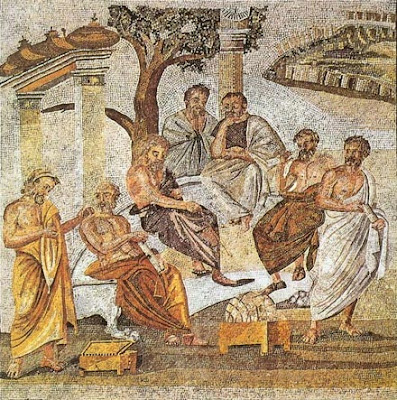 ON May 21st the Religion of Antinous honors Plato, Saint of Antinous, because May 21st is Plato's birthday, and no worshipper of Antinous could possibly forget HIS birthday.

The greatest of all western mystics and philosophers was born on this day in the year 427 BC. He was originally named Aristocles, but was called Plato by one of his teachers because of the breadth of his shoulders and of his speech, and we might also say because of the magnitude of his legacy of wisdom.

He was a follower of Socrates and the majority of his works are written as Dialogues of Socrates, wherein Plato elaborates his vision of the Universe, the inner workings of mankind, the complexities of human relationships, and the virtues of civilization.

All we know about Socrates is in reality only what Plato has told us of his teacher. Out of loyalty, Plato gave all personal credit to the wisdom of his divine teacher.

Plato founded the Academy in Athens that was dedicated to the love of wisdom and to the perfection of the minds and souls of young men. The image above is a mosaic from Pompeii showing Plato and his academy assembled under his famous olive tree.

Plato studied Pythagoreanism in Italy and made further speculation into the mathematical mysticism of the first philosopher thereby creating the model upon which western monotheism is based. The Platonic system was essentially a unification of the social inquiry of Socrates with the cosmic ramifications of the teachings of Pythagoras.

Here is how Flamen Antinoalis Antonius Subia explain's the significance of Saint Plato:

"In the vision of Love that Plato expounded, Venus Urania, Celestial Love, is glorified as highest form of human affection, above the earthly requirements of procreation. The love between two men, what is innocently called Platonic Love, was considered by Plato to be the most divine form of relationship.

"Hadrian, in all ways the most Platonic of all Emperors, the veritable manifestation of the Philosopher King as glorified by Plato in The Republic, was demonstrating the meaning of Venus Urania, for all the world to see, in his passion for Antinous.

"For the beautiful light in which Plato illuminated the inner nature of homosexual love, he is venerated as a divine Saint of the Religion of Antinous."