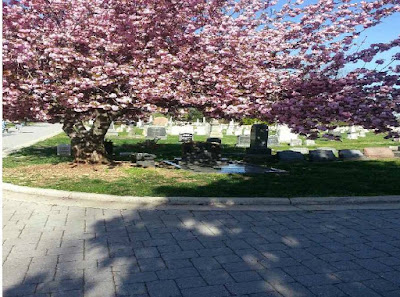 YOU all know of the ANTINOUS OBELISK in Rome ... now there is an Antinous Obelisk in North America.
Priest Jim Crawford has erected a cenotaph inscribed with the name of Antinous in the LGBT section of the Congressional Cemetery in the US capital. 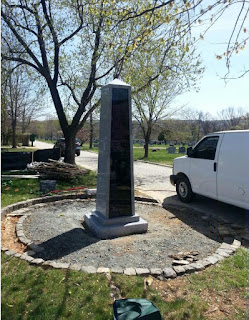 It is thought to be the only cemetery with a LGBT section.
Above is a picture of the grave of Leonard Matlovich under the blooming cherry tree. If you should visit Leonard's grave and turn around, directly behind you you will see the obelisk in the second picture.
Take the short walk to the obelisk and you will see the name of Antinous and his dates inscribed on the fifth niche down from the top.
Antinous Priest Jim Crawford's name is on the plate as well as that of Henry Moses III, a saint of Antinous, whose urn is within the niche. Henry Moses III, May 20, 1968 - October 25, 2007, was a gay man and partner of Antinous Priest Jim for 15 years who died of HIV related cancer. 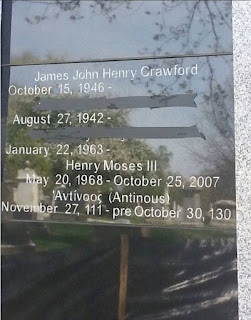 He worked for the Hotel Employees and Restaurant Employees (HERE) International Union in Washington, DC.
Henry was responsible for adding same-sex health benefits to the HERE contracts with hotels and restaurants.
He was director of Pride At Work, the LGBT advocacy group within the AFL-CIO.
The names of two other gay men immortalized on this cenotaph are covered over out of respect for their wishes.
If you are ever in Washington, DC, and intend to visit the very historic and interesting Congressional Cemetery, you might want to stop by and give a remembrance to our Antinous.
Antinous is now inscribed on an obelisk on the North American continent!
Posted by Hernestus at 12:00 AM