THE DAY THE NAZIS STORMED
THE WORLD'S FIRST GAY INSTITUTE 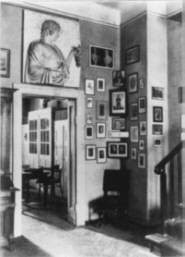 ON May 6th, the Religion of Antinous commemorates the book burnings and the ransacking of the world's first gay scientific institution — foreshadowing the Gay Holocaust.

On this day in 1933, the Nazis stormed and shut down the Institute for Sexual Science which had been founded by Dr. Magnus Hirschfeld in Berlin in 1919.

In collaboration with the Scientific Humanitarian Committee, the institute was founded for the research of human sexology, primarily for the purpose of repealing "Paragraph 175", which was the German Law that made homosexual acts illegal.

The work of the institute was a reflection of the widespread gay liberation that prevaled in Germany after World War I. It was specifically targeted by Adolf Hitler as one of the foremost "degenerate depravities of the Weimar Republic" which the Führer vowed to eradicate. 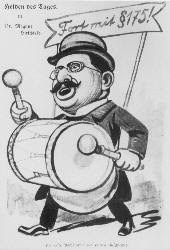 Next week, on May 14th, the Religion of Antinous celebrates the feast day of Saint Magnus Hirschfeld. The man called the Father of Gay Liberation died on May 14, 1935, in exile in Nice, France, an embittered and broken man.

He died on his 63rd birthday. A life that had started out with such lofty ambitions ended in disillusionment. He was of Jewish ancestry and began his career as a medical doctor but very soon devoted his life to the study of homosexuality. 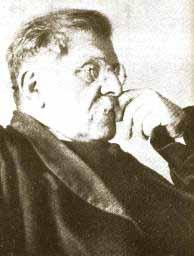 Dr. Hirschfeld spent the majority of his career writing and lecturing around the world on the nature of homosexuality and other "intermediate" sexual types, including cross dressers.

The word "transsexual" was coined by Dr. Hirschfeld to describe the phenomenon that he argued was a natural extension of human sexuality.

For his work, the Nazis targeted Dr. Hirschfeld as an example of decadent Bolshevistic/Jewish influence infecting the purity of the German people, luring the Aryan race into impure and destructive perversity. He was ultimately driven into exile and burned in effigy as an emblem of evil.

His institute was ransacked May 6th and his books were publicly burned in a bonfire on May 10th, 1933.

The exquisite replica frieze of Antinous was ripped off the wall and smashed to pieces. 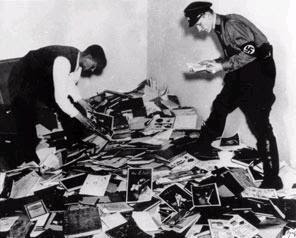 In another ironic twist, homosexual members of Ernst Roehm's SA Stormtroopers (shown above) hurled these books to the flames in 1933 — and would themselves face persecution and death when Hitler turned against Roehm only a scant year later during the "Night of Long Knives" in June 1934 when Hitler decided that Roehm had become a liability.

The storming of the Institute for Sexual Science was the first step in the persecution of homosexuals, who were later sentenced to labor in the concentration camps, the extreme cruelty of which usually resulted in death.