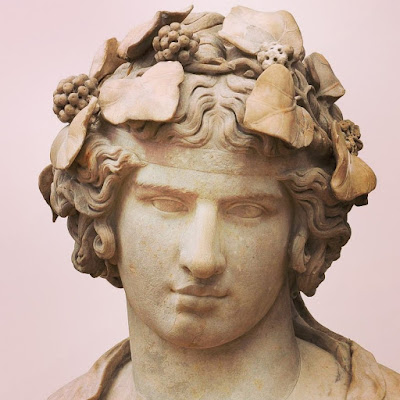 TODAY is your lucky day for a new start. Remember the birth of Dionysus!

In Classical Mythology Zeus/Jupiter often visited mortals in disguise, for his radiance was too dazzling for mortals to behold ... rather like the Sun in a profound configuration with Jupiter, Pluto and the STAR OF ANTINOUS as it is this week.

In the story of the birth of Dionysus, we see that Semele Princess of Thebes had been made pregnant by Jupiter in disguise.

So, Semele decided to ask Zeus to grant her a wish, and he took an oath on the river Styx that he would give her anything.

She asked that he appear to her in all his glory. Jupiter was forced to comply.

However, mortals could not look upon Jupiter without bursting into flames, which is what happened to Semele.

Jupiter managed to save the unborn baby by sewing it inside his thigh.

A few months later, god Dionysus was born, who managed to save his mother from the Underworld and brought her to Mount Olympus, where she became the goddess Thyone.

Antinous traditionally has been identified with Dionysus "Twice Born" of mortal woman and divine radiance.

Antinous/Dionysus reminds you that you are HOMOTHEOSIS ... Gay Man Godliness Becoming the Same in Divine Radiance.