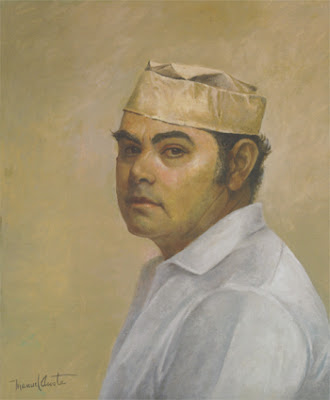 WE honor Manuel Acosta (May 9, 1921-October 25, 1989) as a blessed Saint of Antinous for being a Texican artist from El Paso who lived and died for his art.

Sadly, he is only known in the English-speaking world for having painted the iconic portrait of César Chávez for a 1969 Time magazine cover.

He was brutally murdered by a 20-year-old boy who was living with him, who had been his model...and more.

Right when he was murdered, they released prints of his work, and my mother bought the full set for me,
it was my first real introduction to art...my walls were covered with Manuel Acosta paintings,
I had no idea that it would mean so much to me later.

Manuel Acosta always used to wear a paper-bag hat. Father Arturo Banuelas, who led the prayers at Manuel’s funeral said, "Today his paper hat is a crown of glory."

He was buried with what he called his Mexican-Italian-Pajama shirt, wearing his trademark paper hat, with a can of Budweiser beer in his hand (his nephew placed it there).